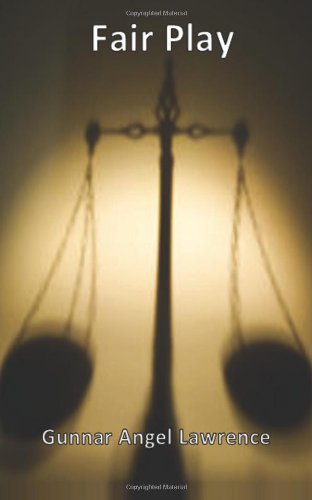 about this book: Fair Play is a novel that is set in Orlando, Florida. Paul Friedman is a detective who receives an odd phone call from his former partner, Glenn Kelley early one morning. One year earlier, Paul and Glenn arrested Jasper Davis for kidnapping, raping and murdering two young girls. Kelley rushed the search of Davis' apartment rendering the evidence found useless. His mistake led to a second trial for Jasper Davis.

Doug Lipton is the brilliant defense attorney who is representing Davis during the second trial. When Davis gets acquitted, a mad man calling himself, Justice begins enacting revenge on those he feels are guilty of turning the court system into a joke in releasing dangerous criminals on the city of Orlando. Justice forces Doug Lipton to experience in a tortuously personal way the pain his actions have caused others.

• Who did you write this book for?
I wrote this book for the person who just wants to escape for a few hours on weekend. I wrote it for the fan of the rapidly paced television shows and for the thriller/mystery buffs of the world.

• What inspired the story line of "Fair Play"?
It was a conversation I had with a friend in Orlando. He told me after a lengthy discussion (about the Casey Anthony case) that defense attorneys deal with the guilt they have to feel in working their hardest to get a murderer, a child molester to go free. He told me they have a quote they use that says, "It's better to let nine guilty men free, than to convict one innocent man."

So I began thinking, what would happen if that line of reasoning came back to bite them in their ass.

• Why did you choose Orlando, Florida for the setting?
Orlando is known as the City Beautiful for a reason. It has the convenience of a big city with enough areas tucked away under the giant oak trees to keep a small town feel. I was raised in Orlando, I'm a graduate of Boone High School, there is action and excitement in this city that adds so much to the story line of the novel that it is almost as if the city were a main character. People who live in Orlando will recognize the sights and sounds right away.

• The summary states that the reader will be forced to ask "Who are the real villains?" So who are they?
That's the question isn't it? Prosecutors who must as part of their job make deals and compromises with murderers, rapists and child molesters. Judges who allow their own biases to override what is true and right in the name of a "fair trial." Attorneys who suppress or ignore their conscience in order to be effective at their jobs. Police officers who are forced to hesitate in making life and death decisions for the sake of securing a conviction that won't be overturned.

All of these kind of come together to even unintentionally make for villainous actions.

• Were there any serious changes made to the story prior to publishing?
Absolutely. Originally there was a rather intense scene while Doug Lipton was getting tortured by Justice. It involved Lipton being forced to endure a very personal torture that while intense and engaging may have delved too deep into darkness. It was part of the fourth day that for the sake of the length of the novel had to be cut entirely. The four days were condensed into three.

• Is there a person who was the inspiration behind your main character Detective Paul Friedman?
There were actually two people who inspired Paul's character. One is a police officer in the Orlando Police department who rose through the ranks through a lot of hard work and sacrifice. The other was actually a friend of my father's who saved his life in Vietnam. Paul is a combination of the best of these two fine men blended with just enough of my imagination to make him who he is.

• Each character seems to be having an inner struggle within themselves during the action of your book, what is the purpose for Doug Lipton's conflicts as a defense attorney?
To answer the problem posed by the "nine guilty vs. one innocent" quote. Doug has a daughter the same age as Jasper Davis' victims. He has to push those feelings aside to do his job effectively. Those nagging "right vs. wrong" issues come to a head in his life when Justice puts him through a living Hell.

• The scenes with Doug Lipton being held captive by the antagonist seem very intense, why is Justice, the antagonist, so angry?
Justice sees what we all see. Injustice, cruelty and a countless number of victims that continues to grow as the legal system becomes overwhelmed with repeat offenders, soul-less defense attorneys and stressed prosecutors. Justice is someone who has just snapped from the insanity of it all and feels he is righting a wrong.

• Which of the main characters, if any, do you identify most with?
I see a little of myself in all of them. I understand Doug wanting to make a living and support his family, even if it means doing distasteful work. I root for Paul who spends a great deal of time trying to convince himself that his close friend Glenn Kelley isn't the one behind the events of the day. I sympathize with Justice who is tired of innocent people getting hurt by the system and understand his desire to see some defense attorneys reaping what they sow.

• Is there a person who was the inspiration behind your character, Doug Lipton?
Doug was inspired by a person that, while I know he believes himself to be a good man, the choices that he makes daily to make a living are less than good. Every day this man rethinks his career choices because he has to essentially lie to others to sell his goods. That inner struggle he goes through, while not as intense as Doug's, still serves to cause a 'right vs. wrong' conflict.

• If you could sum up the theme in "Fair Play" in one word, what would that word be?
Thrilling.

• Do you have a specific writing style?
I prefer the fast-paced style that is akin to a season of the television show, '24' or the final scenes in the "Return of the Jedi" movie where the action is taking place on many fronts at the same time. These action scenes come together only at the very end to an exciting and satisfying conclusion.

• Who influenced your writing the most?
I love the Patrick Bowers' series by Steven James. (The Pawn, The Bishop, The Knight) The way James blends the knowledge of geospatial science with the hunt for a serial killer is nothing less than artful. His rapid-paced action keeps the reader hooked from the first page on.

• Are you more of a character artist or a plot-driven writer?
I prefer a plot driven story, but it's the way each individual character reacts in the midst of the plot that makes the story what it is. I like to put ordinary people into extra-ordinary circumstances and seeing them go through the experience to come out on the other side.

• Other than selling your book, what do you hope to accomplish with it?
I hope to introduce readers to a world of excitement and intrigue as the novel unfolds. Set in a real place, with real-life characters, Fair Play is an escape for the thriller book enthusiast.