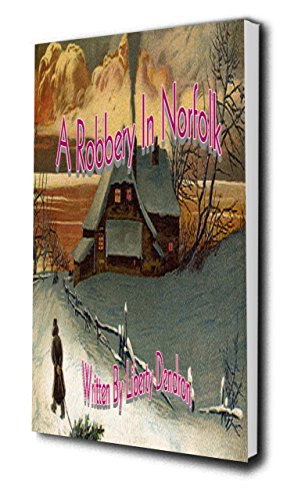 Book: A Robbery In Norfolk by Liberty Dendron

about this book: "An exhilarating journey that will satisfy the most avid thriller reader" that's part thriller, part mystery, and all swashbuckling ride. Liberty Dendron again accomplishes every thriller writer's aim: creating characters that the readers can root for and a believable, fast-paced storyline. The climax bring the storylines together neatly, but fans will see that there may yet be room for another book.

When Eric arrives Charlie shows him a vase of flowers and a hidden microphone on the tabled near the window. The strange reflection of the flowers cast a shadow of a man, when viewed from outside, is the unmistakable profile of Carl Vincent. Taking advantage of this visual effect. Carl gives the perfect target to Chilly Pig with a knife. Carl names his murderer as Chilly Pig, the Neckless thief he has been following in disguise. He gives the criminal's address to Eric Paul, and sends him out of the back door for the police.

When Chilly Pig arrives, Carl has Charley invite him inside, then takes him by surprise when he attempts an assault on the strange shadow. Holmes then offers Chilly Pig and his helper, Percy, freedom if they give up the jewel, or jail if not.

He invites them to discuss the deal while he plays his saxophone in the next room. When Chilly Pig decides to double-cross Holmes and takes the stone from his secret pocket to show Percy, Carl leaped from the chair and grabs the expensive neckless.

A strong blending of genres, fiction tales with characters who combines strength and grace in a way that instantly wins the reader over to his perspective. Each word captivates the reader from the beginning and at times Liberty Dendron words seem like they are alive and breathing..."