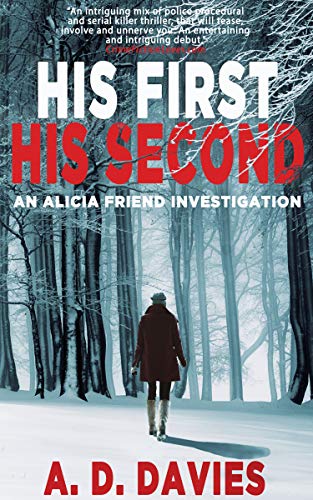 Book: His First His Second - An Alicia Friend Investigation by A. D. Davies

about this book: An adorable cop.
A darkly-skilled vigilante.
An obsessed former FBI agent.

His First His Second is a multi-layered serial killer thriller, set in the UK, but inspired by US authors such as PJ Tracey, James Patterson, and Michael Connelly.

Although the main character is Alicia Friend, a perky yet highly-intelligent police detective, the reader follows many narratives. While the police are hunting for a man who has killed twice and kidnapped a third young woman, the latest victim's father uses skills learned in a former double-life to launch his own investigation. He remains close to Alicia, using her for information, whilst hindering her at the same time. And while the killer goes about his business, former FBI agent arrives from New York, with his own deadly agenda. The three key narratives play out, until they come crashing together.

The protagonist herself, Detective Sergeant Alicia Friend, may in real life be somewhat annoying. But in this mystery-thriller, her upbeat demeanour and almost pathological positivity help inspire the team to do better, to carry on, and not succumb to the darkness and depression that investigating such crimes can inflict on officers. She refuses to change her personality just to fit in with the colleagues who become jaded. She CHOOSES to be happy, no matter what.

The novel was a long-gestating project, originally written in 2005. It was turned down by publishers, although it was close to earning the author an agent, faltering at the final hurdle. In 2014, as other opportunities arose, His First His Second was finally published, rewritten to incorporate technological advances and political changes with the police.

Although this does have at its centre a police investigation, it is not an outright procedural, moving with the pace of a thriller, and featuring some violent scenes, which contract sharply with Alicia Friend's upbeat personality.

Video: His First His Second - An Alicia Friend Investigation by A. D. Davies