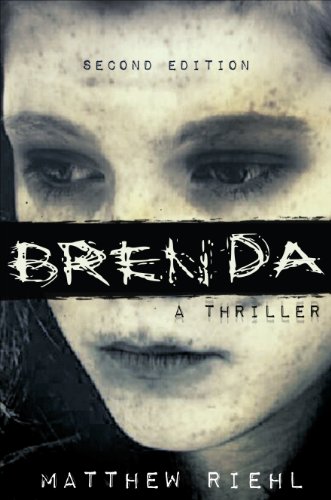 about this book: In "Brenda," an epic, nail-biting thrill ride, young Jax Wright, haunted by his past after making a catastrophic mistake as a child, spends the better part of the first eighteen years of his life in a juvenile detention facility. When he's released back into society his only option is to put the past behind him and make a new life for himself.

As Jax battles the fear that accompanies adjusting to life on the other side of the brick walls, a place he came to know as home, he's suddenly faced with a far greater challenge, as there's someone who's been watching and waiting during his eleven years of incarceration with the intent of making him remember the past by making his future hell on earth. His tormentor, the one known only as "Brenda," drags him into a perilous quest that will either drive him to his early grave, along with the rest of his family, or culminate in his ultimate redemption.

• What inspired you to write this book?
What makes this book especially intriguing is that it was inspired by a true event. This is the story of what may have happened had the outcome of the event been different, which easily could have been the case. It's a story with a strong message imbedded in chaos and mayhem.

• Who are the primary readers of your book?
Anyone who enjoys a thriller that starts fast and gains momentum throughout, with a man battling a virtually unstoppable force in an effort to save those he loves, which requires risking his life while navigating a minefield of treacherous and seemingly insurmountable obstacles, before culminating with a shocker of an ending will want to read this book. It's an inspirational story that illustrates what the human spirit is capable of when faced with extreme adversity.

• How long did it take to write it?
It took approximately three to four months to write this novel as the premise provided so many possible directions in which to go that it made if fairly easy and another two to three months to edit and polish it.

• How did you come up with the title?
The title was initially "The Avenged," but I changed it to "Brenda" because it's more unique, mysterious, ominous and powerful. Plus, it's also a tribute.

• Why did you choose this cover?
The cover I believe is a good visual representation of the content of the novel.

• What was the hardest part of writing your book?
The most difficult aspect of writing this book was the research involved, which was extensive, and the editing and polishing. The content itself came easy and was stream of consciousness.

• Did you do research for your book? What did that involve?
The research primarily involved making sure the descriptions of the scenes were accurate, which meant many hours on the Internet verifying street names, times of historical events, weather conditions on certain days and at certain times, etc. There was a lot of fact checking involved, much more than was necessary for my previous novels.

• Did you learn anything from writing your book and what was it?
I learned that although it's fun to write such an epic novel, it is also difficult and much of the time is devoted to research and rewriting and editing. I had already learned this previously, but "Brenda" was my biggest challenge because of all of the research necessary to create a credible narrative.

• What do you want to say to your readers?
I just want my readers to know that a lot of effort went into writing this book and the result is a novel that I am confident will provide a very enjoyable reading experience. I am proud of this novel and fans of the suspense/thriller genre will not be disappointed.

Wow! What a spectacular thriller. This unknown author keeps churning them out and they just keep getting better. In this epic novel, the protagonist, Jax Wright, who made a tragic mistake during his childhood that represents any parent's worst nightmare becomes the victim of what seems to be akin to karma but dealt via the hands of this diabolical character, Brenda. Dormant during the eleven years Jax spent behind bars in Juvenile Hall, Brenda returns with a vengeance and is hell bent on making Jax suffer in the same manner she did by playing a twisted game of "catch them if you can" that has Jax racing across the country from one horrific disaster to another to try and save his family, fighting through one obstacle after another and somehow managing to avoid death. I got goosebumps several times while reading this as the young man goes to heroic measures to remain "in the game" snatching victory from the hands of defeat at Brenda's expense, which causes her to raise the stakes. The story culminates with an incredible ending that completely blindsided me and made me want to cheer. This book would make a great movie. [by Barbara Reimer]