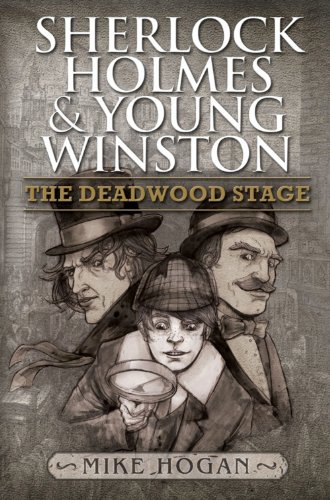 about this book: This series of books originated in an article I read that said that twenty-odd per cent of people in the UK thought that Sherlock Holmes was a real, historical character, and a similarly daft percentage thought that Winston Churchill was a fictional character. How, I thought, could I convince people that Winston was real? Have him meet Sherlock Holmes, of course.

The not-so-doting parents of Winston Churchill, aged twelve, are concerned that the boy is not only dim-witted and unable to concentrate on his schoolwork, but that he might be suffering from a terrible disease inherited from his father. The family doctor suggests they consult Doctor Watson, an expert in such diseases from his time in Afghanistan.

Winston joins Holmes and Watson at 221B Baker Street, and he is soon involved the investigation of interwoven cases of poisoning, street-walking, kidnapping and murder.

In this, the first of a series, I tried to create an authentic late-Victorian world through setting, characterization, and above all dialogue. The Victorian idiom, especially the different modes of speech and vocabulary used by upper and lower classes is easy to caricature, but hard to replicate. That, and avoiding the almost inevitable Holmesian cliches (deerstalker, Persian slipper, 'Elementary' etc) were the hardest challenges in writing the series.

I did a great deal of research on Victorian London. In the first book, The Deadwood Stage, London is constantly evoked as Holmes and his companions walk its splendid thoroughfares and squalid alleys, cross and re-cross its streets and squares in hansoms, and navigate the Thames in steam launches. I hope that nothing anachronistic has crept in.

Victorian men, from the aristocratic heights through the vociferous middle class to almost the lowest depths, had opinions on most things, and they were unafraid to express them. I touch on several middle-class Victorian obsessions: the dangerous classes, poisoning and poverty; new inventions like the safety bicycle, electric light and the telephone; the Empire, America and women's rights.

The original Conan-Doyle stories are about many things, but if there is a golden thread running through them (and Patrick O'Brian's brilliant sea stories) it is friendship.

The relationship between Holmes and Watson is a key element in the book. Like most very close friends, they sometimes find it difficult to express their feelings, and now and then, they bicker. By 1887, they had shared their Baker Street diggings for seven years or more. My Watson, like Conan-Doyle's, expresses some dissatisfaction with his friend's Bohemian habits.

Churchill is of course the cuckoo in their nest, and Watson is somewhat ambivalent about him; he is charmed by the boy, concerned for the safety of a Marlborough, and alarmed at the attention he gets from Holmes.

The splendid Conan-Doyle cast of minor characters make their appearance: Mrs Hudson and Billy of course, the Irregulars and Inspector Lestrade; I add to the mix Colonel Buffalo Bill Cody and his band of cowboys and Indians, in London in the Jubilee year with their Wild West show.

In The Sherlock Holmes and Young Winston series, I have tried remain true to the spirit of the original stories; to balance mystery, humour and derring-do; and above all to entertain. I would be very grateful, should you read the book, if you would let me know how well or ill I succeeded.

Excellent! The device of combining/merging fact and fiction across the melodramatic back ground of the late Victorian years, is used most artfully here; substantiated by quality research. Mr Hogan makes the willing suspension of disbelief very straight forward and there are now nasty shocks or even quaint anachronisms. Mr Hogn is one of those eriters who does it so well that he does not intrude. More of the same as soon as you like please Mike. [by David Warriet Edwards]