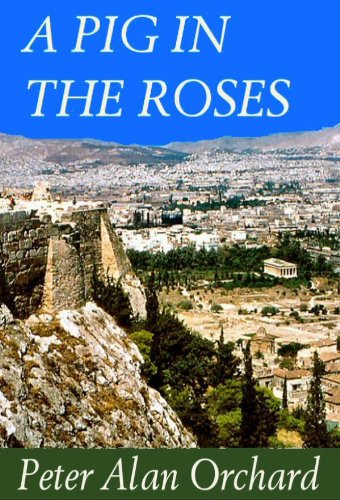 Book: A Pig in the Roses by Peter Alan Orchard

about this book: Athens in 431 BC was a city of gold and poverty, mud-brick and marble, democracy and slavery. A city without a police force, where five hundred men would gather to debate the right of a farmer to dig up an olive-stump, or where the knife which sacrificed an ox could be solemnly tried for murder and flung into the sea. Where twenty thousand people together watched great plays in winter in an open air theatre. Where slaves and convicted criminals spent short, sick, lives mining silver underground.

Here, twenty-five centuries ago, a popular general could desert to the enemy, then be welcomed back with a public procession. An adulterer caught in the act could be killed by the husband legally in front of witnesses. A great sculptor could build a statue of the city's goddess in gold and ivory, then be accused of stealing the petty cash.

This was the world of Perikles, Euripides and Sokrates. The world too, of Diokles: merchant, family man, inquisitive, loyal, and a terrible lyre player. We also meet his intense young wife Helike and his two children, Xanthippe and Euphemos; Helike's uncle, the widowed war veteran Makron; Hipponikos, the master potter; Kleitias, the scholar and barber, a Corinthian whose home city now supports the enemy; and Melitta, a dazzling young courtesan from Samos, companion of the ambitious cavalry commander Aristarkhos..

When Diokles returns in the spring from a successful trip across the Aegean, he anticipates a warm welcome from his wife and family in their house in Artemis Street, a winding alley in the depths of the Potters' Quarter. But he is unexpectedly early and his wife Helike sends him out again to visit an old friend, the potter Hipponikos. When he arrives, the shop is empty but for a Syrian slave and a crowd has gathered at the nearest fountain to stare at the corpse of Sosigenes, a farmer from Helike's home village on the coast and an old family friend.

Astonishingly, Sosigenes' widow denounces Helike's uncle, Makron, as the murderer. Diokles has to use his native intelligence and skill as a merchant to get to the truth behind the charge. Even after Makron is acquitted by the homicide court on the Hill of Ares, the danger is not over - but it comes now from a different and unknown enemy.

As he tries, with the support of Helike, Kleitias and Melitta, to smoke out the real murderer, Diokles finds that he needs to stir things up a bit. It works, but two more murders take place before Diokles, bleeding from a knife attack, confronts the killers in the back room of a leather-worker's shop.