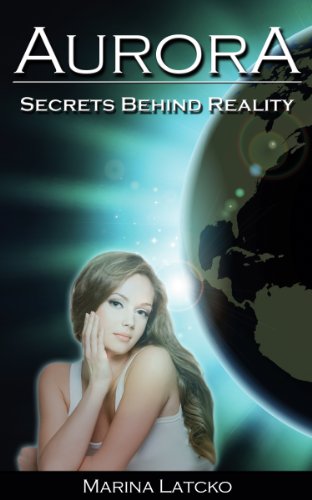 about this book: Aurora: Secrets behind Reality is a story about 16-year-old Nicole, who lives a rather boring life seeking consolation in dreaming and reading about true love and breathtaking adventures until her best friend begs her to spy on her crush and his girlfriend.

This sudden venture also attracts Nicole's attention to the guy in question and stirs up her interest and motivation to become desirable for him...

The books begins as a love story with the teenage girl suffering from lack of popularity and self-esteem, but only till the moment she finds an iPhone left behind in the mall where the boy and his girlfriend have an embarrassing fight. Nicole regards this unexpected find as her chance to stop being a freak not possessing social must-have items and designer things. However, that turns out to become the least of the wonders Nicole is going to experience on her way to the truth about herself and her place in this reality.

I have always loved books which give me excitement over heroes' twists of luck, as well as being able to astonish me with fundamental answers and revelations to secrets of the reality surrounding us. But unfortunately, the older I got, the fewer books were left to satisfy my never-ending curiosity.

This realization had relentlessly been gnawing at me until the book's basic idea suddenly sprang to my mind, and then I knew I was prepared to share my knowledge, research and experience with girls of 14 and older who seek not only entertainment but meaning as well.

The book is written in English, not my native language, to reach a wider audience and also spark interest of fellow Russian girls, who tend to grasp all too eagerly anything which comes from America and disregard their own heritage, regardless its value.

It took the story ten months to unveil itself and the characters to develop into accomplished, almost real people behaving according to their own laws.

To depict the places of the book where I had never been before: Aurora, CO and St.Petersburg, FL, I had to browse lots of websites and 'walk' along the streets using Google Maps, imagining my heroes living their lives, arguing and reconciling with each other, and revealing dark and thrilling secrets very close to them.

My other research subject was existing conspiracy theories, with some of them playing a crucial role in the development of Nicole's story and having certain clandestine schemes toward the girl.

The study and deeper immersion into somewhat paranoid thinking of individuals believing in such theories all the same enriched my understanding of the reality surrounding us and highlighted some bonds among events previously not taken into consideration.

I greatly hope some of the readers will contract my enthusiasm and start noticing more wonderful things behind seemingly dull reality than they have given any thought before.