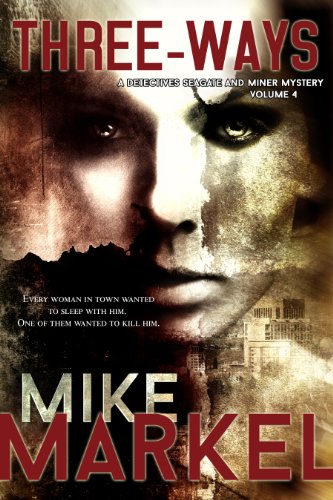 about this book: Three-Ways is the fourth volume in the Detectives Seagate and Miner Mystery series. Like the three previous books, Three-Ways is narrated by Detective Karen Seagate. She is 42, a recovering alcoholic who is trying to figure out how to deal with her disease, a by-the-books chief, a new boyfriend with his own attic full of emotional baggage, and a world that, in general, makes little sense. She wants to dislike her young partner, Ryan Miner, a cheerful Mormon with a wife and 2.5 kids, but with this, as with most of her goals, she fails.

Three-Ways is about the murder of Austin Sulenka, a graduate student who is a sex addict. Seagate and Miner start with the three women he had sex with on his last night on Earth: his girlfriend, who charms every man with her striking beauty; a former student in his writing course who is still bitter because he reneged on the promise to give her a B if she slept with him; and his thesis adviser, who might have revealed to him a secret in her past that could destroy her career.

Investigating the various love and sex triangles that complicated the victim's short life, Karen Seagate finds herself in a three-way relationship that promises to jeopardize her own fragile sobriety.

Detective Karen Seagate is foul-mouthed, cynical, rude, depressed, and insubordinate. She lies constantly and assumes that most of what people say is untrue. She expects nothing good to happen to her and is rarely surprised. She's too high-maintenance for most men and for all bosses. Really, there would be no good reason for anyone to want to have anything to do with her--that is, if she were not extremely good at figuring out which liar is also a killer.

• "The characters are captivating, some tugged at my heartstrings and others got under my skin. It's fast paced and kept me guessing until the end. If you're a mystery fan then you'll love this book and if you're not a fan of this genre this could be the book that converts you." — Amazon reviewer

• "You will have a hard time finding a better way to entertain yourself with a book; this is fine summer reading." — Amazon reviewer