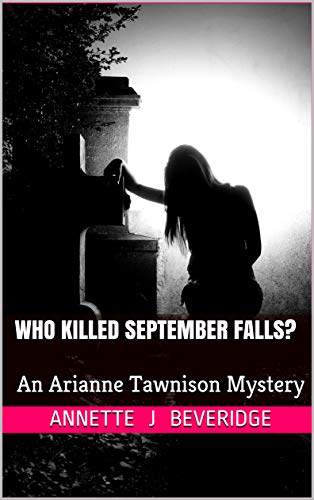 about this book: Darkness invaded every corner of the studio, creeping along the walls. Shafts of moonlight glinted teasingly through the large skylights holding the shadows at bay, spotlighting the scene in the middle of the room as September recoiled in horror at the carnage in front of her.

Who Killed September Falls? A murder mystery set in Europe and follows journalist Arianne Tawnison as she hears the devastating news that her best friend and celebrated new artist September Falls has been viciously murdered. Unraveling a web of lies and deceit, Arianne realizes that there were many secrets hidden and that by exposing the truth, she had now placed herself in terrible danger.

I was inspired to write this novel because the idea had been bubbling away for a couple of years but I was always to busy as a full-time writer to sit down and indulge. I moved to the South of France and decided to take a month off work and to write and promote the book in just one month. Madness yes and hard work as my challenge included creating the website as well. I wanted to prove to my writing students just what could be done with a determined mindset and a willingness to work hard.

The title was the first part of the writing process because I literally woke up and had the title in my mind. The characters and plot grew over time. I created four very different covers and held a competition whereby people could vote for the best one and the current one was the winner.

I always had it in mind to write a murder mystery that was different. I wanted the murder to occur at the start and for the reader to learn about the deep connection between the characters through the protagonist's eyes.

Who Killed September Falls, is a fast paced novel that opens with a bang; a suspicious death of a stunningly beautiful friend and the pending investigation that follows. It's not just any suspicious death but one involving a glamorous, beautiful friend of a journalist who is determined to get to the bottom of a death few others seem to care about.

The book shows the cold side of those involved who make Arianne Tawnison's every effort as complex as possible. It is a gripping storyline and uses non-fictional towns and places, which leads me to wonder why a television murder mystery production company hasn't got hold of this yet.