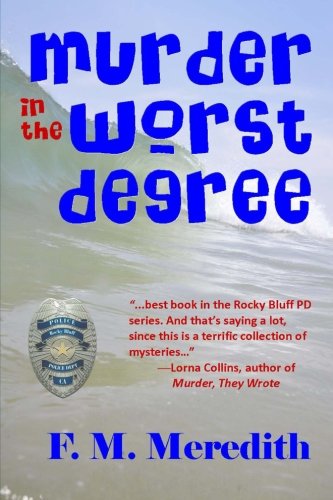 about this book: When a body comes in on the same wave as a surfer, Rocky Bluff P.D. responds. Detectives Milligan and Zachary are sure that it is the old man reported missing by his relatives. When it's learned he's a victim of murder, it's not long that several suspects turn up: the son and grandson, the housekeeper, his three friends and a mystery woman. While following up on clues, other problems arise, a serial rapist, changes made by the new female police chief and ongoing personal problems among the men and women who make-up the Rocky Bluff P.D.

The title, Murder in the Worst Degree, was given to me by a friend--and I had no idea how it was going to tie in to the story until I was nearly through.

My police officer son-in-law sparked my first interest in writing about police officers and their families and my love of mysteries seemed like a perfect combination. I also did several ride-alongs with him and officers in a different department. I've belonged to the Public Safety Writers Association which gives me personal access to law enforcement officers who kindly help me with research.