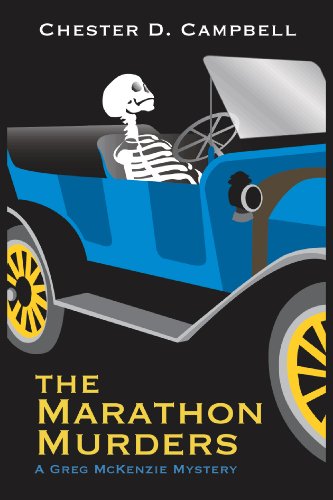 about this book: The idea for The Marathon Murders came from an elderly neighbor whose father had worked at Marathon Motor Works in Nashville back in 1914. She had been over to see the restored factory, was really impressed, and insisted I write something about it. My wife and I visited the place and got the grand tour from Barry Walker, the intrepid entrepreneur who had done the job. When I saw the thick interior walls and the fancy wood trim, I got an idea for a mystery. It involved an officer of the company who disappeared just before creditors forced them into bankruptcy court. He was accused of embezzling funds, but his family was certain he hadn't. His body was found a few years later, sitting in his car in a deserted barn near Nashville. My senior PI's, Greg and Jill McKenzie, are retained by the victim's great-great granddaughter to find the truth. Some old papers were found in the wall, but now they and the man who had them are missing. More murders pile up as the story develops. When the book came out, we had a launch party in the old Marathon show room with vintage cars parked around.

Midwest Book Review said: "This fourth installment of the Greg McKenzie Mysteries is proof positive the series remains strong and fresh and is a major contender in the mystery venue."