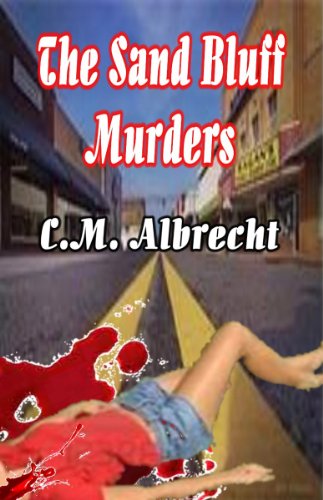 about this book: I've always placed my earlier novels in cities. Not always the same city, but they were always pretty good-sized cities.

Being a big Agatha Christie fan, I especially like Jane Marple who normally does all her work in St. Mary Mead or in other villages around Merry Olde England.

I was particularly inspired to write my own murder mystery set in a small town by a comment Ms Marple once made. It was a cool March afternoon and we were discussing crime together while enjoying tea and some excellent seed cake when she looked across at me and said:

"Human nature is much the same in a village as anywhere else, only one has opportunities and leisure for seeing it at closer quarters."

So, after thinking about this for some time (it takes longer than you may think), I came up with a little idea.

Rather than a hire a complete amateur detective like Miss Marple (she only works on a volunteer basis), or a hard-boiled detective like Philip Marlowe (too expensive and too much attitude), I thought I'd like to introduce an average young man, Jonas McCleary, whose entry level pay would be something I could afford.

Jonas innocently thinks being a cop may be a good career move.

His one real asset is that he's good at written tests and breezes through one to become a real police officer.

The reality of police work, domestic disturbances, shoplifters, traffic tickets, turns out to be very boring and unsatisfying to Jonas. After a year at that he sees an ad for a detective test in the tiny town of Sand Bluff. He easily passes the test, and since there are few applicants, Jonas finds himself Sand Bluff's Chief Homicide Detective...well, all right, Sand Bluff's only detective. Why does Sand Bluff want a detective you may ask. They really need another police officer, but if they hire an officer they have to provide him with a uniform. A detective doesn't need a uniform.

So far so good, but on his third day at work, Jonas is assigned a murder case. A murder in sleepy Sand Bluff where the only killing folks do around here is bottles of beer and the occasional cat that strays onto Broadway when the bar closes.

Hey, this is the most excitement Sand Bluff's had since whenever that Elvis entourage stopped back in '62 to fix a flat.

Jonas knows he isn't really prepared or trained to investigate murder cases, but hey, he's all Sand Bluff's got.

But before Jonas even begins to get a handle on his murder, Twyla, Sand Bluff's resident hussy, is found brutally murdered as well, and that's just the start of a real crime wave.

Before this mystery is solved, Jonas is going to have to poke his nose into some dark corners and wander down some dark alleyways — and keep from getting killed while he does it. With a little luck however, he may solve a nasty mystery and bring a killer to justice. And he may just meet Miss Right along the way.