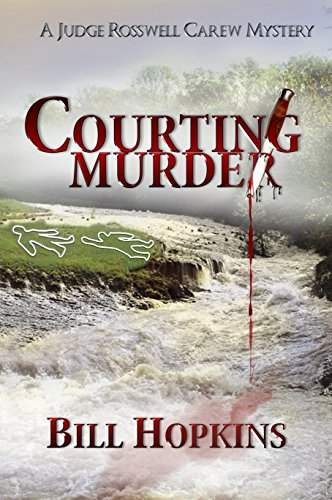 about this book: Imagine having a cushy job that paid well and you were the boss. Got that? Now, how about if you hated the job? That's the predicament Judge Rosswell Carew finds himself in. He's sure he'd make a better detective than a judge. The local law enforcement folks are gently (some not so gently) urging him to stay on the bench.

But he loses them.

The judge uncovers a nest of poisonous secrets in his rural hometown that threaten his life and the life of his girlfriend, Tina Parker. Judge Carew is so desperate that he calls on Ollie Groton, a fellow he's well-acquainted with, because the judge has thrown him in jail many times.

The characters in this mystery will tickle your funny bone while at the same time posing some serious questions. Don't miss COURTING MURDER!

My research for the book was spending twenty years as a trial court judge. Believe me, I heard some great stories. I began writing this novel after I retired, using my experience as a background. It's definitely not a cozy; some would call it "hard-boiled." Although he's light-years ahead of me in talent and story-telling, Carl Hiaasen is my hero and I hope I've written in that vein.

It took me about six months to write it. COURTING MURDER is, obviously, a pun that I hoped would show that the story is humorous. The cover is of a stream flooding in Kentucky, taken by a government agency who kindly gave me permission to use it.

One of the best lessons I learned in writing this book was that sniffing under the veneer of a small town can reveal some devastating secrets. I hope my readers will enjoy reading it as much as I enjoyed writing it.

And, yes, a second Judge Rosswell Carew story is in the works!