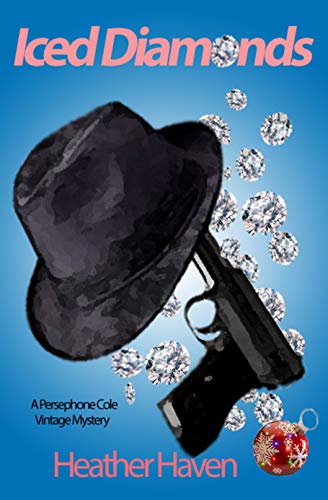 about this book: The Christmas Killings Conundrum is part of a vintage holiday mystery series and was actually the first book of the Persephone Cole Series to be written. When I got it finished and submitted it to Books We Love, they suggested I have the series start earlier, so I sat down and wrote the Halloween offering. But this is the first born baby. I wanted this series to be about an intelligent, talented woman who was socially challenged in some way. Percy is not in the first bloom of youth – 35 was not considered young in the 1940s – and was not an 'accepted' beauty of the time. She's nearly 6 feet tall and a full-figured gal. Because of this, her approach to life is different than most other women's.

It wasn't until I was nearly finished writing it, that I discovered by making her so large, she could be as physically tough as most male shamuses of the era. That was a great bonus for the Sam Spade, Philip Marlowe side of her character I was going for. Percy and her family live during a darker time for the U.S. – another challenge. The country had just come out of the depression and was entering World War II. There was food and gas rationing and many other ramifications from being at war. But Percy survives it all using her brain and wicked sense of humor. I love her.

Other books by Heather Haven (more)