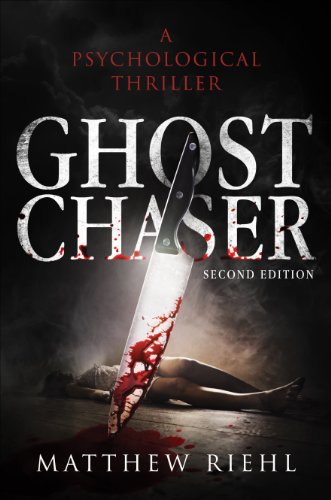 about this book: "Ghost Chaser" is the story of a small-town homicide detective, Niles Patrick, with an unusual sixth sense, who's called to the scene of a grisly murder of a beautiful young woman where there's only one piece of physical evidence--fingerprints. When Niles returns to the police station he runs the prints himself and finds something deeply disturbing; they're his, yet he doesn't know the woman nor has he ever been to her home.

When the exact same thing happens a couple nights later and then again shortly thereafter, Niles and his partner of twenty years, Marcus Lattimore, determine they're hunting a serial killer who may or may not be Niles. Niles knows it's just a matter of time before he becomes the primary person of interest and has precious little time to solve the mystery that's driving him to the brink of madness.

• What inspired you to write this book?
The idea inspired me. When it came to me I immediately thought it was extraordinarily unique and realized if written right it could potentially be a mind-bending psychological thriller.

• Who are the primary readers of your book?
Anyone who likes a bone-chilling psychological murder mystery that will keep them guessing from start to finish, along with a knee-buckling ending, should enjoy this book.

• How did you come up with the title?
I came up with the title, "Ghost Chaser" because, metaphorically, when you're looking for someone who might be yourself, it's a lot like chasing a ghost. There's another reason why it is a fitting name; however, to reveal this might give too much away.

• Why did you choose this cover?
The cover is creepy, which fits the content of the novel to a "T". It is also relevant to and sets the tone for the story.

• What was the hardest part of writing your book?
The novel came easy, other than making the transition from script to novel, which requires more effort than most people would imagine. The story was all stream of consciousness. I let the plot lead me wherever my mind strayed and discovered the destination was more disturbing than I would have ever anticipated. I grew up reading Stephen King and Edgar Allan Poe novels and much of my writing is infused with their affinity toward the macabre.

• Did you do research for your book?
I did a lot of online research and drew upon my knowledge of the setting where the story takes place. In addition, all of the cop movies and "Law and Order" episodes I've seen I believe resulted in a credible police murder mystery.

• Did you learn anything from writing your book and what was it?
I learned that I'm able to write different genres for diverse audiences likely because I was exposed to hundreds of novels of every genre imaginable in college as an English and American Literature major. The styles of all these writers are incorporated to some degree in much of my writing.

• What do you want to say to your readers?
I just want my readers to know I write for them, to give them a respite from reality, which we all need from time to time. I've learned over the last year that the satisfaction of writing novels is in the journey, not the destination. I believe my readers will thoroughly enjoy becoming lost in this dark and mysterious world where what seems to be rarely is and where pure evil lurks around every corner.