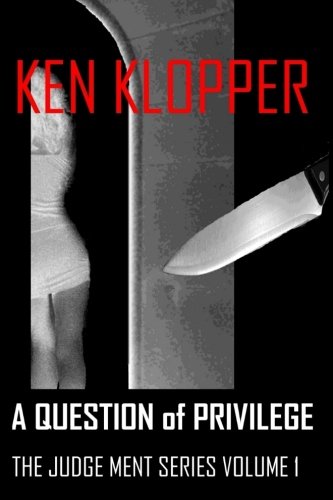 Book: A Question of Privilege - The Judge Ment Series by Ken Klopper

about this book: This is the story of a High Court judge in South Africa who tries a murder case that at first sight appears to be both straightforward and uncomplicated. Ment's actions however lead to the discovery of a series of murders all linked with similar facts.

Although Judge William L Ment is a brilliant judge with a sharp legal mind and a charming and likable personality, he is also cursed with the power of acute intuition and an uncanny sense of knowing when things are not what they seem, even when nothing is really out of place. Often faced with these dilemmas he must decide what course to take, often creating problems that are difficult to deal with. The options are usually controversial and unorthodox.

William Ment is also completely human and he makes his choices within the environment he finds himself and with consideration of the people he is linked to.

• Does Ment make the correct decisions?
• Does the course he takes lead to more bloodshed?
• Is he justified when protecting a friend and upholding professional privilege?
• Who the hell is Jerry and what does he have to do with the murders?
• How does Ment deal with Jerry and is he ultimately successful?
• Where does Nadine fit in and what dark secret does she hold?

Readers who enjoy courtroom drama should enjoy this book. It deals quite accurately with the process of a criminal trial in a South African court, but contains a number of unexpected twists and turns that will ultimately only become fully known in the second book in the series entitled "A Question of Revenge."

The author uses his legal knowledge acquired over more than forty years and his fascination of the human mind and psychology. Fiction is sometimes a great deal more accurate than reality.

• "A fast-paced psycho-legal novel with a South African flavour."

• Judge Ment remarks quite graphically on his approach to murder trials that the mind should be cleared of emotion in order to establish the truth. As he puts it: "Sometimes you need to wipe away the blood before you can see clearly."