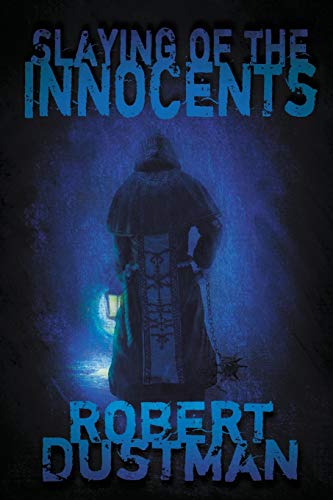 Book: Slaying of the Innocents by Robert Eaton Dustman

about this book: "Slaying of the Innocents" is an intense, chilling murder/mystery that takes place in the normally quiet fictitious small town of Clover Valley, Washington. One of the ironies of the story is that Detective Philip Gaines retired from the New York City police department to relocate his family and accept a similar job at less pay in what he had hoped would be a respite from solving homicides in such a large, dirty and congested city. It doesn't take him long to realize he has made a mistake. Shortly after arriving in Clover Valley, people start being murdered gruesomely at an alarming pace. There is no shortage of suspects, but figuring out the motive for the rash of horrific murders proved elusive.

The book's dark cover is designed to elucidate the eerie nature that unfolds. "Slaying of the Innocents" is my attempt to keep readers on the edge of their seats and challenge them to guess the outcome of the book, which will be an almost impossible task.

One book reviewer wrote: "It is action packed filled with twists and turns that lead to an astonishing ending.
Linda Strong (August 2)