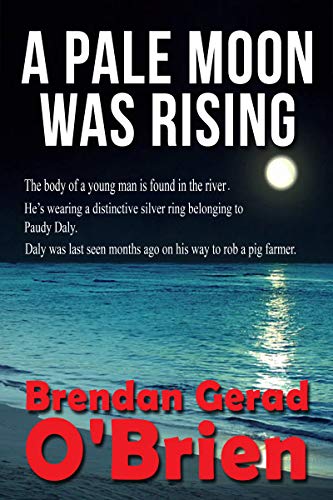 Book: A Pale Moon Was Rising by Brendan Gerad O'Brien

about this book: A Pale Moon Was Rising is a murder mystery set in Ireland in 1944. The title is the first line of the world renowned ballad 'The Rose of Tralee.'

The story begins a few years after the Gallows Field episode and it involves Eamon Foley again, so it was a natural progression in the life of that character. But I wanted it to be a bit lighter than Gallows Field, which was very dark in places. However, as the story developed it took on a mind of its own and I ended up going places I hadn't planned for, some of them even darker than gallows Field.

The good news is the war in Europe is turning now. But Ireland is still under enormous pressure from the lack of basic essentials. And the constant threat that Germany could use it as a back door to attack Great Britain.

Eamon Foley is now a Garda officer. He's sent out to Blenerville when a body is found in the river, and he's intrigued to find the scruffy corpse is wearing a distinctive and expensive looking silver ring.

Foley traces the ring to Paudy Daly, the oldest son of the notorious Mixer Daly. Paudy has been missing for over nine months already.

So who is the mysterious dead man, and why is he wearing Paudy's ring?

And where does the disturbed pig breeder come in?

Then Garda Foley learns that the last time Paudy Daly was seen alive, he was on his way to rob the home of that reputable pig-breeder.