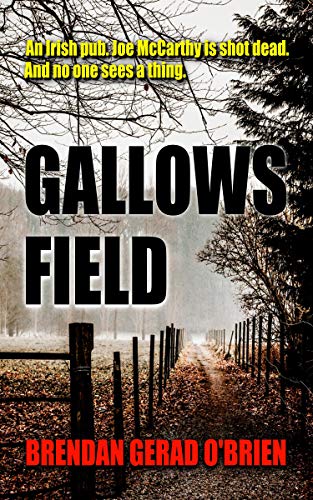 about this book: gallows Field is a Murder Mystery set in Ireland during World War Two, which took over two years to write and edit it to within an inch of its life.

The title Gallows Field is from a paupers' graveyard in Ireland, and the cover tries to reflect the sadness of the place. The book was a pleasure to write because it gave me an opportunity to re-visit the streets and countryside of my childhood in Ireland, so the only research needed was acquired from old photos and conversations with old school friends.

To those readers who're kind enough to take the time to read this book, I hope you enjoy reading it as much as I did writing it, and I'd be delighted if you could give me honest feedback on it.

The story is set in Ireland in 1941. War is raging in Europe. Ireland is struggling with the consequences – the blockade of vital resources, the rationing of food and fuel, the influx of refugees, the shortage of jobs are causing unrest.

Dublin Barman Eamon Foley's boss is murdered over a missing ledger. Now they mistakenly think Foley has the ledger, but he escapes home to Tralee.

Nine months later Foley is in a crowded pub when his brother-in-law Joe McCarthy is shot dead.

In the chaos Foley thinks he sees the Dublin killer rushing through the door. Is this a message? Have they caught up with him at last, looking for the ledger?

Or is it as the local Gardaí suspect – Joe was killed by a jealous husband, given his reputation as a notorious womanizer?

The next day Foley's sister Mary is found dead in the town park.

And his son is taken away by a nun in a car.