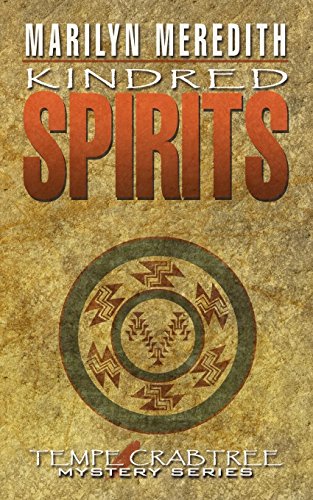 about this book: In KINDRED SPIRITS, Deputy Tempe Crabtree travels to Crescent City CA to learn more from her friends there about an artist who was murdered in Bear Creek. While there she meets two intriguing Tolowa women who not only fill her in about the murder victim, but also about how the Tolowa nation was brutalized and nearly wiped out, and about Big Foot.

The story came about after my own trip to Crescent City to be a part of a writers' conference. While there, I had a book signing where I met a most unusual and interesting Tolowa woman. We had an instant connection. She certainly educated me about the plight of the Tolowa people. I knew I had to write a book about some of what she'd told me. She actually became two characters in the story I wrote because of her strong personality.

After the book was published, I went back to Crescent City where we had a huge signing and luncheon in a new Bed and Breakfast. My Tolowa friends and I both signed my book and spoke. It was a wonderful experience for both of us.

The title, KINDRED SPIRITS, came from the fact that the characters in the book were kindred spirits, and my new friend and I were also.

Of course I did a lot of research, about the Tolowa and also about the legendary Big Foot. While doing the last, I learned about the Hairy Man who is a legend on our local Indian reservation--and went on to include him in later books.