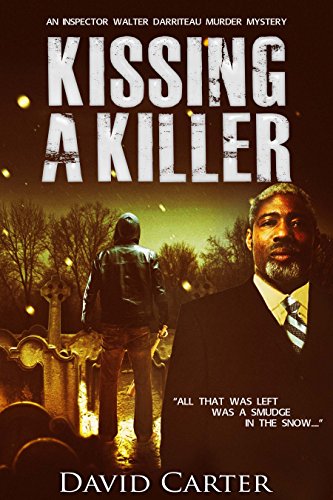 about this book: David Carter's "Kissing a Killer" is now available. Here's the start of the story, a mystery that will keep you intrigued to the very end.

There's a heavy storm rolling in from Snowdonia, battering the ancient city of Chester in the north-west of England. It's early winter, and it's growing colder.

Twenty-something Eleanor Wright has fallen on hard times. She started doing tricks for men, and women too, if need be, to fund a burgeoning drugs habit. She lives alone in a run down caravan in a remote area, down by the cold river Dee.

It's late Friday night when a knock comes to the caravan door. There's a tall young man there, looking for action, looking for company, so he says. Eleanor is not really in the mood, but he's sure as heck nicer than the creeps who usually come calling. Neat haircut, cute smile, and handsome too, and loaded, so he says, and against her better judgment she lets him in. Why not? She needs ready cash to acquire vital provisions, for a modern girl has to have some pleasures in life.

At close to midnight, and despite the heavy rain, the caravan burns down, and Eleanor suffers a dreadful death in the inferno. The question is, is it an accident, suicide ... or could it possibly be murder?

A couple of days later the burnt out wreck is discovered by Eleanor's mother, and frantic with worry, she calls the police. Inspector Walter Darriteau is handed the case and sets off on a journey that none of his team could possibly predict.

"Kissing a Killer" could well be Walter Darriteau's most difficult case to date, and he won't stop until he gets to the bottom of it.

This is a traditional whodunit that will keep you guessing right to the end.

Here's a brief extract from the book:

Corla Revelation resembled Oliver Cromwell, high forehead, large flat nose, and hefty warts aplenty, yet for all that, she was a vivacious woman, and rarely short of admirers.

She made a decent living through her full-time counselling work, and part-time fortune telling business, though where one finished and the other began was becoming increasingly blurred. She liked to say she was a spiritualist, and a medium, and had gone to the trouble in the past of inventing highfaluting sounding associations that she christened: "The British Spiritualist Congress" and the "European Mediums Association" and proceeded to have printed expensive and impressive looking Articles and Certificates, that she framed and set on her walls. They sure as hell impressed Corla, and in due course wowed her clients too. That was the plan, and most times, it worked.

In a good light and on a bright day she could pass for thirty-nine, as her friends would eagerly confirm, especially after Corla had bought the drinks. But on a bad day after a heavy night out, and maybe not standing her corner, those same friends would swear she was fifty-nine, looking sixty-nine. Fact was, no one really knew how old Corla Revelation and her close-knit family of warts were, and that was exactly as she liked it.

She'd always had an eye for the main chance, and that had served her well in the past, and it would continue to do so in the future, and she always paid a great deal of attention to the criminal cases covered in the press, and especially ones from Chester and surrounding areas, and most particularly the ones where financial rewards were offered, and of special interest to her were the worst crimes imaginable, and that invariably meant rape, murder, and death.

The Chester baseball bat murder had certainly piqued her interest, as she devoured all the media coverage she could find. It was causing quite a stir, for it wasn't every day that a well-liked and well-known local woman was murdered in her own home in the genteel city of Chester.

In her quiet moments Corla believed she possessed ESP powers, and she would test that ability to the max by sitting back in her favourite wing-backed armchair, a bottle of whisky on the small table close by, with her favourite crystal cut glass, as she attempted to reconstruct the face of the killer in her mind. If you don't believe in yourself, she mused, how could you expect others to believe in you? He will come to me, she would say aloud. He will come.

He's a tall man, and dark too, that was eminently clear, though whether that intelligence had been garnered through her imaginary powers, or subconsciously, via the increasing media coverage, it was difficult to tell.

Corla sipped twenty-year-old malt whisky, and closed her eyes and blanked her mind, and let the force swirl over her, and through her, and then she said aloud in a real strange voice: It will appear, as it always does, everything about him will materialise, and sooner than we think, and then, I shall be famous.

She reached out and topped up the glass. Always nice to whet the whistle before one went out on the town. She glanced at her expensive wristwatch, a present from a long ago wealthy lover. She'd quite forgotten his name. The watch ticked on, as it always did, never missed a beat. 8.22pm. Give it another ten minutes, she thought, and she would slip on her favourite faux leather coat, and head down to the city centre, and meet some friends, and drink the night away.

And here's what they say about the Inspector Walter Darriteau books:

This is a weighty 497 page tome of which the dénouement gathers rapid pace during the course of the last 250 thrilling, mind-blowing pages - certainly a testament to David Carter's writing skill. If I had a long slow climb to the action, I've never had a roller coaster ride to the end like it and we're just talking about turning the pages of a book here. For those who enjoy a good thrilling mystery, yet again, I can but highly recommend this author, David Carter and this, his latest book.

Margaret Henderson Smith – Author of A Flight of Fancy! & San Marco the End of the Road

Not only is this a very good story, for those of us who live in Chester, it is so interesting to have a story set in "our city" and the surrounding area. Look forward to reading the latest book.

This was one of my favourite reads of recent months, a really refreshing novel that kept me engrossed throughout. I liked the writing style and David Carter has a unique way with words, his descriptions are particularly strong and he knows what to write without waffling on. The writing style, combined with well-researched material and a great lead character in Inspector Walter Darriteau made sure the storyline never lost its zest.

I found this to be a thoroughly absorbing and well-written book. Keeps you guessing all the way through, would highly recommend.

The lead Detective Walter Darriteau has to unravel what is going on and why. He's a well-drawn character, believable and likable. The supporting characters stand out and add layers to a good story. The author writes with gritty realism, the dialogue is realistic and the reader is pulled into a dark underworld.

David Carter manages to paint a memorable picture throughout this book; sometimes moving, sometimes shocking, and sometimes so funny that it had me laughing out loud - a whole gambit of emotions in this thoroughly entertaining and unpredictable book - and like all the best authors, leaving the REAL SHOCK to the end. A very well written and highly recommended read - I couldn't put it down.

The new Inspector Walter Darriteau murder/mystery "Kissing a Killer" is out now as an ebook and in paperback. Join Walter and the team, as they try and track down the killer before he strikes again!

Thank you for reading, wherever you may be. I appreciate it.