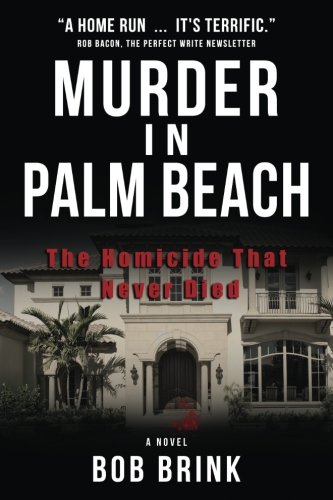 Book: Murder in Palm Beach - The Homicide That Never Died by Bob Brink

about this book: Closely based on a sensational 1976 assassination, Murder in Palm Beach is a gripping novel that leaves the reader wondering about the fairness of our criminal justice system. A prominent citizen is felled on a cool January night by a shotgun blast through a window of the home he shares with his wife and their six children. Police can't find the killer, but an ambitious prosecutor gets a jury to convict small-time hoodlum/karate expert Mitt Hecher as fellow jail inmates testify he confessed.

Repeated appeals for a new trial by several attorneys working without fees are rebuffed, while Hecher's wife contracts a usually fatal disease and their child struggles with the stigma of his father's imprisonment at Raiford, where a stabbing a day and a killing a week are the "mean" average.

In the thin guise of fiction, the book contains shocking new information, never before made public, about the real killer and the person behind the slaying. Author Bob Brink, an award-winning journalist, was a newspaper reporter in the locale where the sensational assassination occurred. It made media headlines for 15 years.

Was Hecher innocent, and if so, who did it? Did the sons of a wealthy Cuban kill Kriger? Were the operators of a gambling enterprise out to get him? Was a love triangle the basis for the shooting? Did a vicious underworld figure do the bidding of a criminal gang? Was a prominent politician behind the slaying? Those are the questions seeking answers amid the exploration of issues of justice and power.

Murder in Palm Beach is the saga of a battle between a man whose swagger has sent him spiraling to the bottom and powerful, sinister forces determined to keep him there. It is a story of redemption wrapped in a mystery tale reeking with power, sex, violence, and romance.