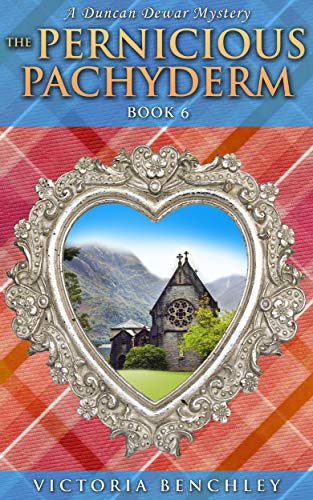 about this book: What is a pachyderm doing in Taye, Scotland? Life becomes a circus for Duncan Dewar, literally, when an elephant is accused of murder. Tourism is on the rise in the quaint village, but so is crime and intrigue. Preparing for his upcoming nuptials and refurbishing his cottage aren't enough to keep Duncan occupied. As the detective becomes embroiled in the murky case, a specter from the past returns, threatening his happy ending. Can Duncan absolve an elephant accused of killing his ringmaster? Can he find the real killer before he or she strikes again? Will a jealous spirit from ancient Clan Neish hinder the Scotsman's wedding and harm his fiancée? There are plenty of suspects and quirky characters in the latest installment of the series set in beautiful Perthshire, Scotland. The Pernicious Pachyderm is book 7 in the Duncan Dewar Mystery Series but also a stand alone novel. See if you can solve the case before Duncan!

Other books by Victoria Benchley (more)