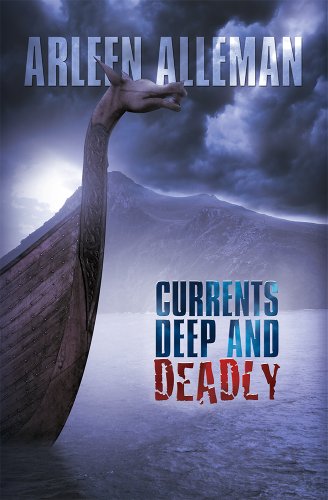 about this book: The adventure begins with Currents Deep and Deadly, an exciting novel about murder, mystery, madness, and romance at sea. I began writing the Darcy Farthing series after I retired from my government analyst job and became an avid cruiser. I use history and geography of seaports in the Caribbean and South America as settings for multiple plots and colorful characters. The cover has a background picture taken from the deck of our cruise ship rounding Cape Horn.

The reader is first introduced to Darcy Farthing as she embarks on a supposed romantic trip of a lifetime with her latest boy friend. We soon realize that she is a deeply troubled woman with a dark secret despite her beauty and brains, and mid-level management job with a pharmaceutical company. The problems on this ill-fated cruise begin when she sees and overhears crewmembers in suspicious conversations that seem to portend an onboard murder plot. That is only the beginning, however, as it becomes apparent that a complicated combination of madness, lust, and greed have overtaken the vessel and its captain.

Darcy meets a quirky set of characters on the ship who become embroiled with her in an astounding set of coincidences and attempts to foil a murder for hire plot, which ultimately results in multiple deaths. Everything that is happening seems somehow related to Darcy's own devastating past. In fact, in a more than strange twist that changes her life and the lives of others, she runs headlong into her past in an exotic South American city. Along the way, she abandons her shallow travel companion and begins a romantic relationship with Mick Clayton, a U.S. Government Accountability Office director, who has problems of his own and also seems strangely connected to her past.

Darcy, Mick, and their travel mates barely escape the cruise alive and are rescued by Don and Charlie, an interesting pair who helps Darcy sort out her emotional issues and by Tom Smythe, the ship's security chief, who becomes a close and lasting friend. The seemingly impossible coincidences and plots convene and resolve in surprising and stunning ways, leaving a little intrigue to be resolved in the second book in the series, Currents of Vengeance. As a reviewer put it, "The ending is satisfying and stunningly more than expected but then the conclusion is actually fodder for the sequel and with these characters' lives so entwined, I need to know what happens to them after the ending." –Author, Mary Deal. The third in series, Current Assets, is scheduled for release late summer, 2012.