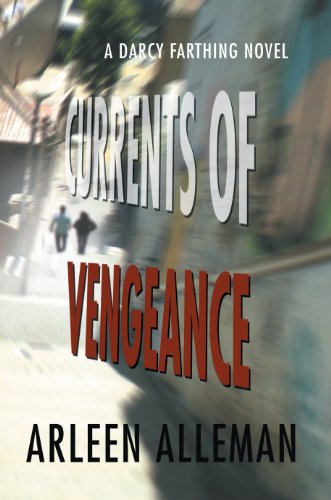 about this book: The adventure continues with Currents of Vengeance, the second Darcy Farthing cruise crime novel. As readers of Darcy Farthing know, I began writing this series after I retired from the U.S. Government Accountability Office and became an avid cruiser. Thus, the first two novels in the series are set on cruises in the Caribbean and circumnavigating South America. There is something for everyone in these adventures, which include elements of murder mystery, romance, intrigue, science, religion, and tidbits of history and geography in seaports along the way. For example, the cover of Currents of Vengeance is a picture I took at the Stairs of Death in Valparaiso, Chile, the setting of one important scene in the book.

As one reviewer said, "Currents of Vengeance is an exciting read . . . an exciting drama combining mystery, revenge and vengeance on a cruise ship . . . Fascinating characters plus a solid plot make this a thought-provoking novel mixed with danger and romance." --J. Weaver, Books-and-Authors.net

In this continuation of the story that began with Currents Deep and Deadly, Darcy, a beautiful pragmatic pharmaceutical company representative and her new boyfriend, Mick Clayton, U.S. GAO Director of State Law Enforcement Issues, reluctantly return to the Sea Nymph, a luxury cruise ship where Mick teams up with Tom Smythe, the former ship's chief of security. They try once and for all to bring a vicious murderer to justice. Aided by the FBI, they unravel crimes committed in international waters which have gone un-prosecuted due to real world jurisdictional issues related to crimes committed at sea. The story unfolds with scenes in Washington, DC, Las Vegas, Nevada, and various seaports, as well as onboard the ship, and culminates with Mick's preparation of cruise crime testimony and GAO report to Congress.

The story is characterized by multiple interrelated plots. Mick is hindered in his ability to carry out the assignment by emotional issues arising from his near-death encounter on the previous cruise. Passengers on the ship become targets of several ruthless individuals seeking revenge against the cruise line or against Darcy, Mick, and Tom. Subplots of PTSD, bizarre biological attacks, rapes, and sabotage all illustrate effects that vengeance has on perpetrators and victims; and intertwine to a stunning conclusion. Darcy's new-found daughter Rachael accompanies them on this second ill-fated cruise, and she too becomes the victim of horrific violence. Throughout, Darcy struggles with Mick's symptoms of depression, and confusing feelings about her ex husband, Brooks Larkin, the wealthy CEO of American Travel Corporation who has re-entered her life "currents" after twenty years.