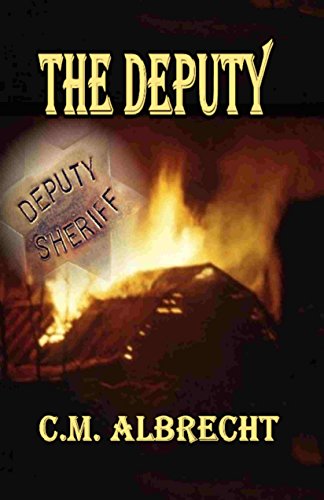 Book: The Deputy by C.M. Albrecht

about this book: The small town of Ashley doesn't have a police force. Instead it has a small sheriff's station where Deputy Sheriff Wayne Terwilliger works. Against Wayne's better judgment, he got wife Janie her small farm just outside town where they have a few animals, a garden and a big pumpkin patch which around Halloween does very well.

Wayne is no coward, having gone up against some bad apples, and generally he's liked around town, although he does have a roving eye. At the moment, it's focused on cute but naive Sandy Division. With Janie busy at home all the time, Wayne life around town is good for Wayne.

But things are about to change when two strangers arrive almost at the same time. One is a good-looking young man who likes Sandy the minute he sees her...and the feeling is mutual. Besides, Sandy is tired of being taken for granted by Wayne who expects her to be on call whenever.

When Wayne spots Willis slinking through town he naturally stops the man. But after a short friendly conversation, Wayne offers Willis a job helping on the farm. After all, it's October and Janie could use some extra help around a farm that always needs more work than Wayne wants to put into it.

At first Janie is put off by this little stranger, but he quickly proves his worth for room and board and things appear to be looking up...but as they say, just about the time you think the coast is clear, the storm hits.

Before this tale comes to its conclusion, we see that nothing in Ashley or its residents is as it appears to be as dark secrets begin to unfold as The Deputy nears its chilling end. From Cambridge Books (http://writewordsinc.com) and as to other sites, you can check all the usual suspects: amazon, nook, kobo, etc.

Video: The Deputy by C.M. Albrecht