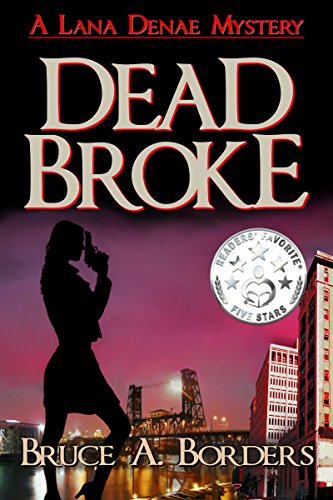 about this book: Murder is a serious thing but not all murder mysteries have to be serious. Dead Broke is a light-hearted look at solving a seemingly impossible murder. A woman is found dead, killed by a single gun shot wound to the chest. The door to her small apartment is locked from the inside, there are no signs of entry and no bullet holes in the walls. No weapon is found at the scene. Yet, someone murdered her, the lady certainly hadn't shot herself dead and then disposed of the gun afterward.

This is the case Detective Lana Denae must solve, and she's not too thrilled with her chances - at first. Then, she discovers there is more going on than simply a single random murder. Someone is looking to make a lot of cash but Lana is determined to stop them before they strike again.

The book is set in Portland, Oregon. The author is from Oregon, which adds an element of authenticity through his familiarity of the area.

Other books by Bruce A. Borders (more)