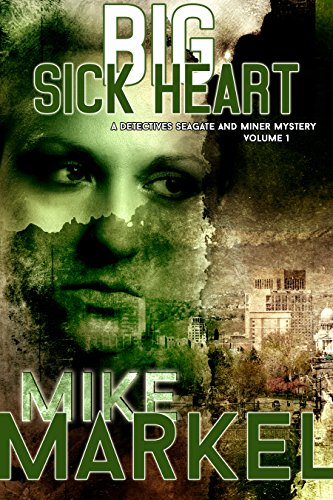 about this book: Big Sick Heart is the first book in my Detectives Seagate and Miner Mystery series, set in the small college town of Rawlings, Montana.

My narrator is Detective Karen Seagate, a 42 year old who hasn't quite come to accept her alcoholism. The disease has cost her her marriage and her friends, and the chief of police is eagerly anticipating a chance to fire her. Her new partner, Detective Ryan Miner, is a 28 year old Mormon family man who appears to have arrived from a different century or planet. He is quite bright and willing to work very hard to figure out how to deal with Seagate.

Seagate and Miner's first case together involves the murder of a corrupt evangelist, Arlen Hagerty, who is on a speaking tour in Rawlings. The title of the book refers to the fact that Hagerty was suffering from cardiomyopathy, a heart condition sometimes called "big sick heart." But I like my titles to pull their weight; therefore, Hagerty wasn't the only character suffering from a big sick heart.

Many readers have told me that they like the character of Karen Seagate and her interplay with her younger and very different partner. I want to point out, however, that Seagate is going through a horrible period in her life. A competent physician who examined her would say she is clinically depressed. One of the symptoms of her depression is her use of foul language. Although she doesn't say anything you don't hear routinely on cable TV, I want you to be aware of this characteristic. If you don't want to read foul language, this book--and the other five books in the series--are not for you.

Here are some reviews from Amazon readers:

• "I adore Detective Seagate. The woman has problems like you would not believe–but she gets the bad guys anyway."

• "I feel like I 'know' Karen Seagate (with all of her demons) and Ryan Miner well enough now to want to see them together again. This book will not disappoint you!"

• "Big Sick Heart sets the stage for what should be a great ride for fans of detective stories. With a new and appealing cast of characters, this series looks to be a winner."

I hope you are willing to give Big Sick Heart a try. Thanks!