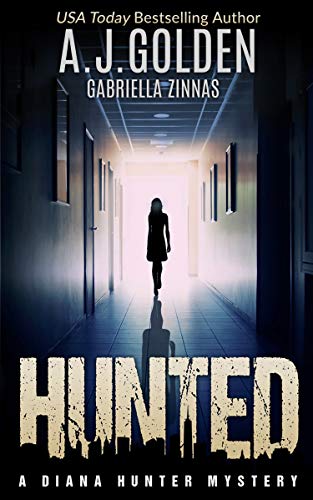 about this book: Did Lydia commit suicide, and leave her husband and daughter by choice – or is something more sinister afoot?

Meet Lydia, John, and Diana Hunter. Lydia is a loving mother and wife, who wants nothing more than the best for her family. John is her husband. He is an over-protective homicide detective who loves his wife and teenage daughter with everything he has. Their daughter, Diana, is a genius, with an IQ level far higher than most. This is a family that adores one another. A family, however, that is torn apart by tragedy.

When Lydia is found dead at her workplace, John loses the love of his life. His heart breaks for himself and his little girl as Diana spirals out of control. The authorities rule the death a suicide, but when events don't start to add up, the family that is left behind begins to suspect something isn't right.

Hunted is the prequel to the Diana Hunter mystery series. It sets up the back story to the entire series and establishes Diana's motivations and character. It isn't a complete mystery unlike the others in the rest of the series but is compelling reading for those who love Diana and her story.

I wanted to write about a badass, a woman who knows what she wants and who goes out and gets it. Underneath it all though, is a vulnerability that only a few will get to see. I think the popularity of this series is down to the fact that the reader identifies with Diana, empathizes with her and wants to see her win out. Will she rise above her demons or will they pull her down? We are rooting for her.

• "I totally loved this prequel of things to come…"

• "I love the author's writing"

Other books by Alison Golden (more)