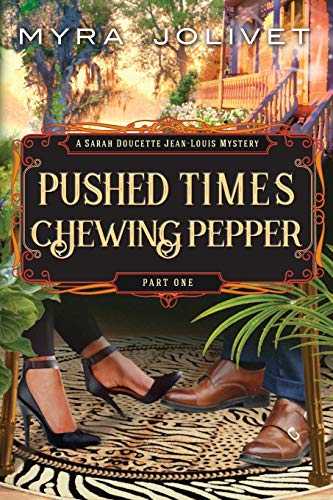 about this book: I have been writing all of my life. I wrote poems and plays as a child and television news, speeches and short stories as an adult. The plot twists and surprise endings of murder mysteries fascinate me. I was determined to eventually write in the genre. It took two writing coaches and six years to create the cozy mystery, Pushed Times, Chewing Pepper. It mirrors much of the crazy in my life; a California native, highly flawed heroine with embarrassing Louisiana Creole roots. Her relatives used to cast spells and talk to the dead. Mine too.

But unlike me, Sarah Doucette Jean-Louis is a family therapist whose search for love leads her to the wrong man, murder and a year-long journey into self discovery. The Creoles say pushed times will make a monkey chew pepper. It means that hard times inspire extraordinary actions. Sarah's hard times lead her into life altering directions.

I wrote Sarah to represent the successful professional women who are made to feel they don't measure up because they have not married by a certain age. Family and societal pressures can creep into the psyche and influence even a strong woman's behavior and choices.

I also decided that Sarah would be the one in her family to inherit psychic intuition. As a woman of science, she is the antithesis to the spiritual gifts of her ancestors. The contrast of the gift and its acceptance, brings to her a deeper evolution.

Sarah's nemesis is the attractive man-magnet, and bitch of a cousin, Stacy. Stacy is that woman we all know who is there to remind of us our faults and short-comings. It is the voice of Stacy that Sarah must learn to overcome in order to overcome the negative voices within herself.

The other aspect of the story that is a mirror to my life is the diversity of family and friends. Often in Louisiana and California families, there is racial diversity. And in northern California, close friendships often exist across racial lines. I wanted to read and write stories that offer that level of diversity. Sarah's close friends, her martini brunch girl friends, represent a diverse sisterhood for venting, laughing, crying and support.