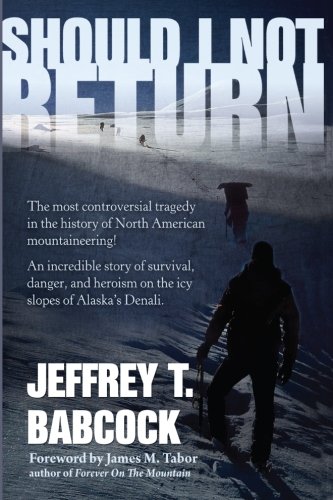 Book: Should I Not Return by Jeffrey Babcock

about this book: I have been working on this book literally for the better part of my adult life. The event around which my novel is centered happened in the summer of 1967. I made a few attempts shortly thereafter to write about the experience, but soon discovered the impact of the event would turn out to be far greater than I had ever imagined.

The title of my book, Should I Not Return, came from "Fare Thee Well" (or "Ten Thousand Miles") an 18th century English folk ballad, in which a lover bids farewell before setting off on a journey. The lyrics include a dialogue between the lovers. This song is most known currently for the Mary Chapin Carpenter version entitled "10,000 Miles" being featured in the movie 'Fly Away Home.'

Ironically, toward the end of my story, one of the characters in my novel, a young girl, actually spoke the phrase, (which I took for my book's title), to me as we sat out on the rustic porch of the Superintendent of Mount McKinley National Park. It was a poignant memory I retain to this day, and one I will never forget.

The cover design for my book was taken from an actual photo of the upper slopes of Denali, during an expedition I led in 1977. The designer of the cover added the climber in the foreground, but the climbers off in the distance and the terrain upon which they are climbing is from the actual photo I submitted to her.

Since my book is largely autobiographical, the most difficult part of my writing experience was delving back into shadows of my family's past, and revealing to some extent the dysfunctional nature of certain members from my family, and the impact those experiences had upon me, and other members of my family.

My book was heavily researched not only revealing certain aspects from my own family tree, but also delving into the colorful and fascinating story of the early pioneer climbs on Denali. Several reviewers have commented on the numerous historical references, photos, and details. One reviewer commented, "The photographs… the photographs are worth the price of the book alone!" I was extremely fortunate to acquire photo permission for the use of many of the pioneer images of Bradford Washburn, Belmore Browne, and several other prominent recorders of the early historical climbs on Denali.

As one reviewer also commented, "The work gives you a glimpse into your soul where our collective demons lurk which we attempt to suppress by overwhelming our senses in the frozen world of the Ice Field Ranges in the Yukon, or on Alaska's glacial regions, or on Denali. It takes you outward, to reality, where your next step may land you deep in a crevasse or a fall down a steep slope. Then beyond to the spirits of the climbers before you in the golden age, that lay down the footsteps on the path that you may be following."

If you decide to read my book, I believe you will find it quite different from any other coming-of-age adventure tale you may have read, and you will be pleasantly surprised. Should I Not Return is a powerful climbing story based upon what has been called North American mountaineering's worst climbing disaster.

In conclusion, I will leave you with the final comments of Wallace J. Orr's review, partially quoted above, "When something is written from the heart the actual words fall away but the true meaning shines through and prevails… This book was also written from the heart. Thank you Jeff, for sharing your experiences, your stories, and your history with us and allowing us to return to this incredible place with you!"

Video 1: An incredible story of survival, danger, and heroism on the icy slopes of Alaska's Denali, otherwise known as Mount McKinley
Video 2: Should I Not Return by Jeffrey Babcock