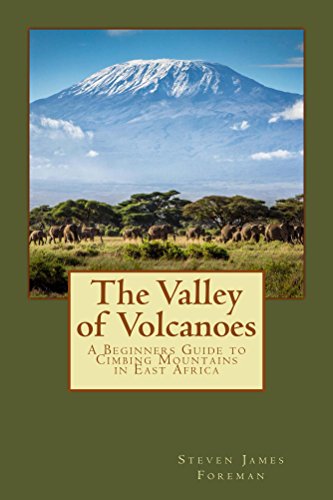 Book: The Valley of Volcanoes - Climbs in East Africa by Steven James Foreman

about this book: Climbing Kilimanjaro or any other Rift Valley mountains? This is a handy beginners' guide that will help you achieve success. It is packed with information on kit and equipment, first aid, preparedness and no-holds-barred realistic accounts of the climbs of five mountains (volcanoes) in the Tanzanian and Ugandan part of the Rift Valley... not the glossy brochure type accounts you will read put out by the travel agents!

A series of distinct rift basins, the East African Rift (EAR) System extends over thousands of kilometres. The EAR consists of two main branches. The Eastern Rift Valley includes the Main Ethiopian Rift, running eastward from the Afar Triple Junction, which continues south as the Kenyan Rift Valley. The Western Rift Valley includes the Albertine Rift, and farther south, the valley of Lake Malawi. To the north of the Afar Triple Junction, the rift follows one of two paths: west to the Red Sea Rift or east to the Aden Ridge in the Gulf of Aden.

The EAR runs from the Afar Triple Junction in the Afar Depression of Ethiopia through eastern Africa, terminating in Mozambique. The EAR transects through Ethiopia, Kenya, Uganda, Rwanda, Burundi, Zambia, Tanzania, Malawi and Mozambique.

Along the length of the Rift Valley in East Africa lie many volcanoes; some extinct, some dormant, and one active.

The most famous of all is Mount Kilimanjaro, but there are other mountains too: these are Mount Meru, Mount Elgon, Mount Hanang and the active volcano, Ol Doinyo Lengai.

In an area known colloquially as the Avenue of Volcanoes in Tanzania also lie the mounts of Longido, Gelai, Empakaai, Kerimesi and Olmoti.

Although these are non-technical climbs (i.e. not requiring harnesses, ropes, crampons, etc.,), make no mistake; these are real 'climbs' on real mountains and not mere strolls up hills. (The climbs to the summits of the Rwenzori Mountains and Mount Kenya are or can be technical above the snow line and (preferably) require previous climbing experience, but, if you do not take your own technical equipment, then the in-country climbing outfitters will supply what is needed).