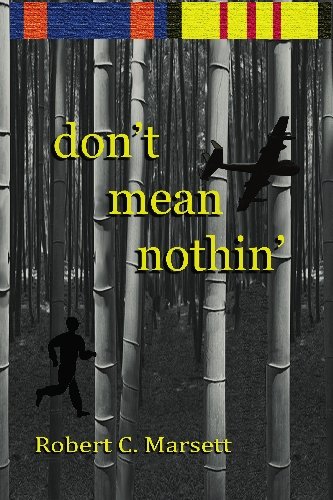 about this book: This is a book I wanted to write for years. It is a fictional account of a young soldier's experiences in the war in Vietnam and Cambodia. Centered around a little known group of US Army aviators who flew the OV-1 Mohawk, this book brings to light a unique group of men who flew unarmed reconnaissance missions over enemy country day and night. Up to now very little has been written about this phase of the war.

While the prolog and epilog are set at the Vietnam Memorial in Washington DC in 1982, the story begins in Fort Polk, Louisiana and continues in Vietnam and Cambodia. The characters include American soldiers both young and veterans, Khmer Rouge fighters and a seasoned Viet Cong officer.

This is not a war story in the traditional sense but rather the story of a young man's growth from a normal teenager to a soldier. "Don't mean nothin'" has no political agenda and takes no stance on the right or wrong of Vietnam. It is about the people not the politics.