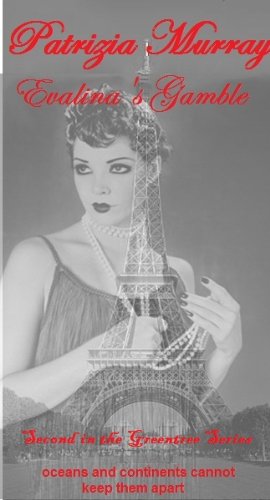 about this book: This is the second in the Montgomery family saga, which began with the book, Lucinda's Grooms. Evalina is returning home to Nordegg Alberta after a grand tour of Europe and Paris, France. She doesn't want to return home, but her father has cut off her allowance, demanding that she return home and marry a man of his choosing. He views her gallivanting around the continent as nonsense and expects her to be a working ranch wife to his neighbor so they can merge their land holdings, and have lots of babies.

On her way home on a luxurious ocean liner, she catches the eye of Jean-Gilles, who is related to the Montgomerys of Greentree. Jean-Gilles intends to ask Evalina's father for her hand in marriage, but before he can do so, she is kidnapped by her supposed fiancee, a man that Evalina hates.

Jean-Gilles must enlist the help of his Greentree relatives to find his intended, but he is attacked and left for dead before that can happen.This is the first in the sweeping saga of the Mongomery family of Greentree. As they help to settle Western Canada, and develop the coal fields that will become the life blood of the town, their children grow up and begin the next generation of Montgomerys. This is an erotic romance Above all, is is a historical look at the emerging west, and the hardships that the families endured as they worked the mines, the land and finally prospered.

The second story further unites the Montgomerys and the Marquettes of Paris. The two families travel back and forth between Canada and Paris, but the third book in the series will take their children into the maelstrom of World War II. Two stories will emerge from this war, those of Mariel and Ford Junior.