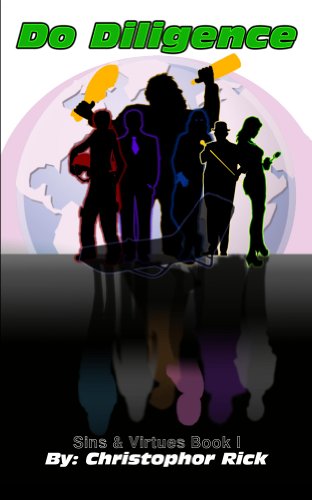 about this book: Do Diligence is the first book in a new modern fantasy series. It's an alternate reality where each of the seven deadly sins and the seven heavenly virtues has been manifest physically and walk the Earth. In the book, a plot begins to unfold when Diligence is captured by the 'magic' wielding Wizards of Renown. This sends the other Virtues, on a quest to find out what happened to their brother. Since they're familiar with the incestuous, dysfunctional and diametrically opposite Sins, they seek them out first. When that fails, they look to a higher power for answers.

I've been thinking about this book since 2007 and when I decided to do NaNoWriMo in 2011 I took a vote on Facebook to see which book my readers and friends wanted me to write. I compiled all the research I had and did piles of new research because the book, in the words of the pre-reader, 'rewrites all of human history and religion in one shot.'

The cover is very symbolic. The silhouettes are those of the Sins and the shadows are the Virtues, Diligence is entirely missing from the cover because that is how the book starts, he goes missing. To make that work I use a lounge chair to represent Sloth, who is only ever seen in that chair in the book. The Earth is in the background, covered in a fine purplish web of energy which represents the ley lines, which play a major role in the book as well.

I called it Do Diligence because I liked the word play. Someone is trying to do Diligence harm or do him in and it's a fitting place to start the story.