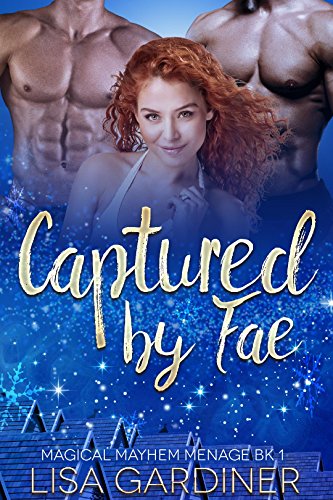 about this book: Captured by Fae is a novel packed with magic, alpha male dominance, explosive passion and suspense.

Captured by Fae is a re-telling of Rudolph the Red Nosed Reindeer, the difference being that in my ménage romance the heroine gets to fly around the world in Santa's Sleigh with two very sexy half-fae men.

A special education professor once accused the 1964 TV movie "Rudolph the Red-Nosed Reindeer" of promoting bullying.

His argument was that the story of Rudolph suggests victims of bullying and people with disabilities must do something extraordinary if they want to expect the bullying to stop.

Perhaps Giuliani has something of a point, however as a bullied child I found the song and story comforting, exciting and magical.

The way I saw the story- it was telling people who were picked on that they could surprise everyone someday with their achievements. That story of the underdog's surprising achievements is as traditional and popular as the story of Cinderella, and as contemporary as Harry Potter.

In Captured by Fae the bullied heroine Lilly has to learn to overcome low self-esteem in order to use the magic she was born with and enjoys a very very sexy night with two alpha male half fae.

This novel also has a strong suspense subplot.

It's a lovely night for a sleigh ride— until something wicked takes the reins.