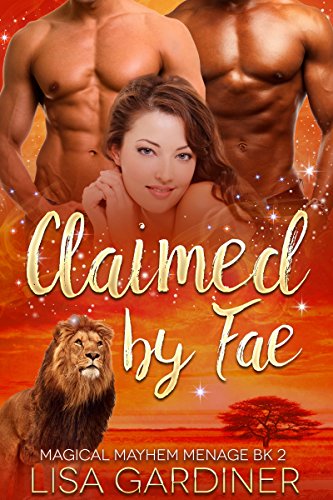 August Peak has to learn to come to terms with her low self esteem in order to come into the magic powers she was born with and find love with two sexy men who also must heal their own complicated romantic relationship and the three must come together as one to use their powers to defeat and evil force.

Lisa's novels have been highly commended in the prestigious Passionate Plume Award for best paranormal romance.

Turned into a were-lion against his will, billionaire Arlan Leonard deals almost daily with two sources of mounting frustration: his inability to control his tendency to shift at random, and his on-again, off-again relationship with sinfully sexy alpha male Jay Nandoro.

Friends with Arlan since they were teens, Jay can't deny there's something between them. But while Arlan seems certain that committing to a sex-magic ménage with a female part-Fae will stop an evil force that's been kidnapping half-fae children, Jay isn't so sure.

August Peak dedicated herself to a life of science, determined to forget the havoc her Dark Fae mother, Duvessa, has wreaked in her life. But when her professor practically drags her to Zimbabwe to study lions in the wild, she is ensnared.

The sizzling tension among the three is surely magic. But when the Dark Fae discover the threat, bullets fly on the African veldt. And coming together—mind, body, and soul—is their only chance for survival.

Praise for the novels of Lisa Gardiner

Captured by Fae (previously Wicked Wonderland) is the first title I've read from the talented Lisa Gardiner. Combining a strong narrative with a wicked imagination, Lisa tells a story that is sexy, shrewd and savvy.

Admittedly, there are some aspects of Wicked Wonderland that I thought were dark. But they're balanced by a passion and power that enchant, excite and entertain from the opening pages to the triumphant denouement.

Well worth the read.-Ashley Lister-Prolific writer and key note speaker at Eroticon

This is a stand alone novel you can read it without reading book one in the series but you can also grab book 1 Captured by Fae by Lisa Gardiner available now.

This is an MMF romance.