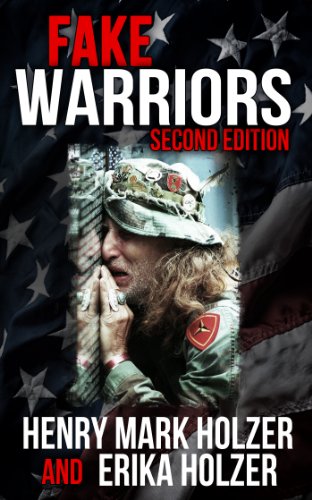 about this book: The more my co-author and I, Erika Holzer, learned from our research about Fake Warriors, the more outraged we became about the wrongs being perpetrated by military imposters. As Americans and lawyers, (I'm a Korean Era veteran) throughout our personal an professional lives we have sustained a deeply ingrained sense of justice and writing a book about the Fake Warrior phenomenon was an opportunity to help correct grievous wrongs.

The consequences of those wrongs are incalculable. Innocents -- widows, wives and children -- experience shame and disillusionment when a Fake Warrior husband or father is exposed.

These and many other harmful consequences of the words and conduct of Fake Warriors, explained at length in our book, are intolerable. For the last forty years, Fake Warriors too numerous to count -- politicians, lawyers, authors, actors, and others -- have succeeded in their masquerades. Indeed, many have prospered--often at the expense of those who have served in Vietnam, Afghanistan, Iraq, and elsewhere around the world.

Fake Warriors: Identifying, Exposing, and Punishing Those Who Falsify Their Military Service accomplishes just what its title says.