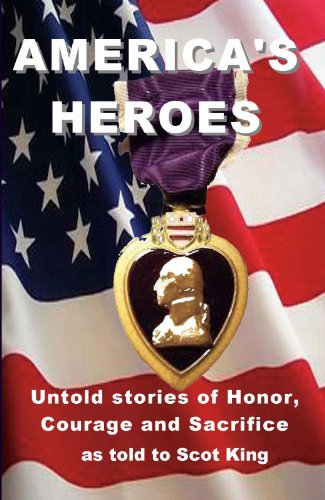 about this book: Scot King, a veteran of the US Marine Corps saw a fellow Marine 'dumpster diving' and felt that he should try to help needy veterans. He joined with J. Jackson Owensby, a veteran of the US Air Force and an author--creator of the America the Great series, along with J. D. Tynan, also an award-winning author and creator of the Charlie Ford series. The three recorded the stories of various veterans from all parts of the United States and transcribed those stories into what will be a series of personal stories of veterans of military action. The first in the series is entitled, America's Heroes: Untold Stories of Honor, Courage and Sacrifice.

The stories are in the words of the veterans themselves, or their survivors, and will tug at the heartstrings at the same time instilling a sense of pride and respect in the heart of all Americans. Many veterans have returned from military action with a series of problems,not the least of which is Post-trauma Stress Syndrom, and the suicide rate of veterans is off the charts. America owes those veterans honor and respect.