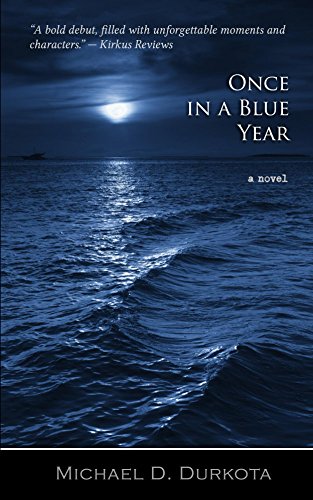 Book: Once in a Blue Year by Michael D. Durkota

about this book: "Once in a Blue Year" started as a 13 page short story about a guy who might have fallen in love with his best friend's wife. Navy service was only a brief mention. I expanded that part of the story and began to explore the pressures placed on young enlisted sailors, boys who were in high school one day and then at war on a nuclear submarine the next day. Essentially they are forced to come of age overnight and are unequipped to handle the responsibility. They make mistakes and the consequences are significant. They get married and have children. They don't know how to manage their lives, loves, or their money. They don't know their own limits, and they exceed them constantly. With only the back story actually take place at sea, "Once in a Blue Year" focuses mainly on the emotional strain to the young families. The love and loss. The waiting, and the uncertainty. It's essentially a story about choices. Choices made, choices avoided. Some bad, some worse.

I worked on the novel for almost 15 years. I put it away for long periods at a time and worked on other things. Each time I came back to it, I had a slightly different focus. It changed a lot through the repeated revisions. I think that resulted in layering and has given it a depth it didn't have in the early drafts.

I struggled with the title for quite some time until one night I was doing some research about the gulf war. I was reading a Newsweek article and a line about the first night of the attack caught my attention, a reference to the moonless night. With the war starting in mid-January, that put a full moon on or near New Year's Eve, which would also make it a blue moon (the second full moon in a single month). I already had a lot of repeated imagery about night skies and the moon, and I realized the main narrative took place within a single year with that full moon in the center. I was explaining all of this coincidence to a fellow MFA student the next day and I said, "I think I should just call it Once in a Blue Year." He agreed emphatically and I never gave it a second thought. The cover concept was really quite simple: I needed a moon, I needed an ocean, and I needed some blue. It took a little searching, but I eventually found the image; I instantly knew it was the one.

I've been pleased with all the reviews I have received, but the following lines from the Kirkus review make me smile the most:

"Debut author Durkota writes a remarkable narrative centered on the afflicted mindsets of his Navy men... And while Durkota's work often feels like a thriller, it's more of a psychological study in which the characters, like flashes of lightning, are wonderfully alive for a very short time."