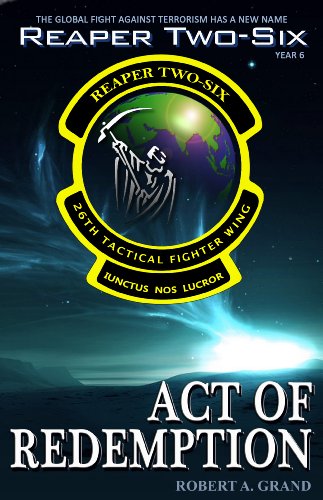 about this book: The global fight against terrorism has a new name: Reaper Two-Six. This techno-thriller propels two rogue pilots headlong into a suspense-filled cliffhanger. Beginning at the controversial Area 51 base with the theft of the Aurora, a top-secret hypersonic stealth aircraft, the tension accelerates when RAFCO, a radical and well-funded global terrorist group headquartered in the vast wilderness of the Colombian jungle, manages to gain control of the Aurora. With this aircraft able to surpass every known weapon and detection system known to man, the President enlists the help of Reaper Two-Six; an elite multinational covert squadron that monitors, infiltrates, and eliminates terrorist activities around the world. In the wrong hands, the Aurora poses not only a threat to humanity but to the very fabric of today's modern society.

With our civilization on the brink of collapse, two Reapers plunge deep undercover to save the world from a global cataclysm. As you turn the pages of this twenty-four chapter novel, you'll experience the intensity, dedication, and skill required to keep our world a peaceful place to live. The Reaper Two-Six trilogy novels incorporate fresh, plausible storylines that reflect the world of today, engaging characters, and state-of-the-art technology.