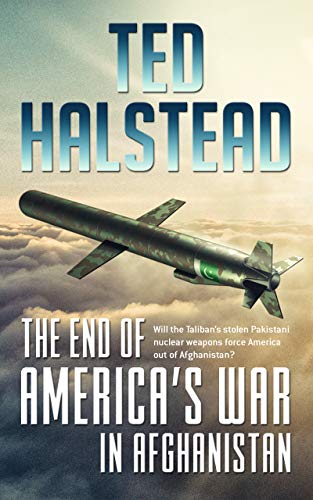 Book: The End of America's War in Afghanistan (The Russian Agents Book 3) by Ted Halstead

about this book: Pakistan tested its first nuclear weapon in 1998. The Taliban have dreamed about stealing some of those Pakistani nuclear weapons to use against American forces in Afghanistan. But how could they, when they are so heavily guarded?

One Taliban leader has a plan that he began working on in 2002, the year after American forces came to Afghanistan. If it works, the Taliban will have eight nuclear weapons to help them return to power in Kabul.

Knowing American forces in Afghanistan will be on high alert after the theft of Pakistani nuclear weapons, this Taliban leader also has diversionary attacks planned, to give him and his men time to reach their targets in Afghanistan.

But Russia has learned about the Taliban operation, and has sent agents to stop it.

One of those agents is an Iranian woman, whose FSB training was cut short so she could be sent on this mission. A nuclear physicist and expert in nuclear weapons design, she is their best hope of defusing any stolen weapon they manage to capture.

The last thing RussIa wants to see is a nuclear-armed Taliban ruling Afghanistan.

Working with American special forces, can these Russian agents stop the Taliban in time?