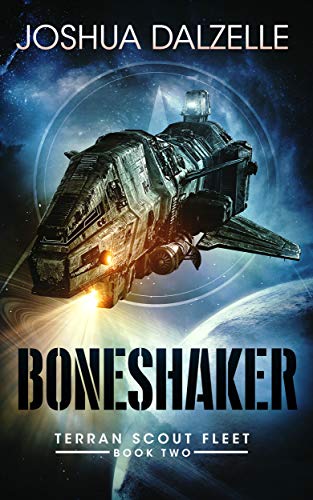 about this book: It started with "Marine," the story of Jacob Brown, a young lieutenant in the United Earth Armed Services that had been forced into a special operations unit against his will thanks to his natural talents. Marine was a Amazon Top100 bestseller and a Dragon Award Finalist in 2019.

The story picks back up where it left off in "Boneshaker," the newly released sequel:

Scout Team Obsidian has been cooling its heels on an alien planet, waiting for the political fallout of their previous mission to blow over so they could come home and recuperate. They needed new personnel and to get a proper ship back under them that wasn't a deathtrap like they one they were in now. Those plans are scuttled when they get the call to reactivate and put on-mission to hunt down one of their own: a rogue captain has taken one of Earth's new Victory-class warships and has joined up with a burgeoning rebelling against the ConFed. If that ship is caught operating with rebels, Earth will bear the brunt of the ConFed's reprisal. Jacob is now in a race against time with an short-handed crew and a ship that might kill them before the enemy gets the chance...