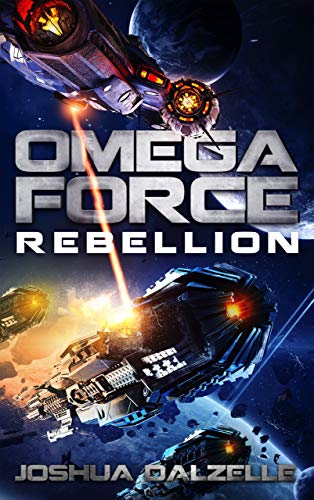 about this book: The quadrant is teetering on the brink of open warfare.

An AI that is only known as "The Machine" has seized control of the ConFed. It remains hidden, behind the scenes, while executing military and economic policy with goals known only to itself. It has already conquered the neighboring Eshquarian Empire in one swift, brutal assault that has left the other regional powers terrified and reeling.

Jason Burke is one of the few who know the true nature of their new enemy. He's agreed to help a burgeoning resistance to the Machine in any way he can, but he knows his own crew and single gunship are no match for the might of the ConFed war fleet, now under the command of the Machine. Will their rebellion be a flash in the pan? Or can Omega Force rally the quadrant to stand up to the new menace?

"Rebellion" is the eleventh book in the Omega Force Series. These books chronicle the adventures of Jason Burke, a human trapped in space that is forging his own path as a hired gun with five other alien outcasts. These books are a delight to write and I hope readers keep asking for them as I don't want to quit anytime soon.