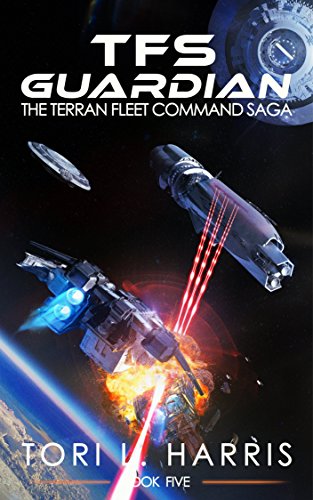 about this book: TFS Guardian is the fifth and final book in the Terran Fleet Command (TFC) Saga. Just like the previous books in the series, it picks up right where the previous book (TFS Fugitive) left off. Book 5 not only draws the original saga to a close, but also details the return of the "Greys" that began at the end of Book 4.

I'm a huge Sci-Fi fan myself, and my goal with the Terran Fleet Command Saga was to explore many of the classic themes I love from the genre, but not in the same way we've all read a hundred times before. While writing, I always tried to keep the "movie version" of the story playing in my mind and constantly asked myself the question, "Is this something I'd want to see?" When the answer was no, I would aggressively cut sections that I didn't feel were adding to the story or keeping the reader engaged and entertained. I hope you will agree that the result is a fun, interesting page-turner that will leave you asking for the next book in the series.

Who are the primary readers? I would say Sci-Fi fans in general, but particularly those readers who enjoy the military / space opera categories. Not to compare myself to the big league authors just yet, but if you enjoy John Scalzi, Joshua Dalzelle, Ryk Brown, or Michael Hicks, you should give the Terran Fleet Command Saga a try.