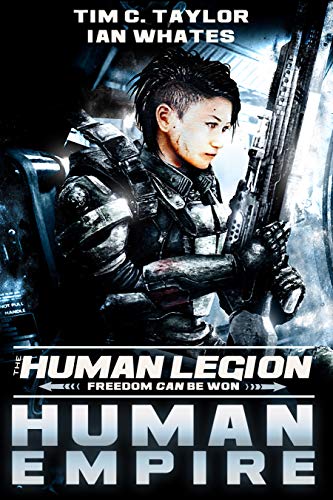 about this book: In the fourth installment of the #1 bestselling space opera series, the Legion must recruit new allies and develop new strategies if it's to establish itself as a major player in the ongoing civil war. But first the Legion must decide its leader. The prize for runners-up in that contest is… decidedly unhealthy!.

I try to write each book so it has a slightly different feel, and here we really start to put the 'epic' into epic space opera. There are new aliens species, new technologies, and fleet-level space battles, but still space for personal revelations and an unexpected twist or two.

To speed the writing, and keep the quality higher than ever, I teamed up for the second half of the series with acclaimed author and editor, Ian Whates. While we were writing 'Human Empire', Ian's most recent space opera novel, 'Pelquin's Comet', reached #1 in the amazon.co.uk science fiction book charts, so we're talking some serious writing pedigree here.

He keeps raising the bar

Just when you think Tim couldn't outdo himself, he raises the bar on excellence. A well written collaboration between Tim and Ian, you can't even tell it was written by two people. It has everything you liked about book three, magnified a million times over; inter planetary combat, conquest, intrigue and space battles between whole fleets! [by SGT MIKE]

Each book gets Better

Having read the previous 3 books I was hooked on the series but was doubtful when Tim brought in a co-author for the remainder of the series. I had no need for any worries, book 4 continues the saga in great style. I was on the edge of my seat all the time I was reading it getting caught up in the action so intensely that I missed some meals. The action is intense and I wonder at the ability of the author to invent strange aliens which he describes for the reader and manages to get these aliens to operate the space ships and equipment. The characters are very well developed and by the end of the book they had become friends or enemies of mine as I immersed myself in the action. Although in my mid 80's I thoroughly enjoyed reading the book and recommend it to anyone under 99 who enjoys an action packed read. [by Ray Gordon]