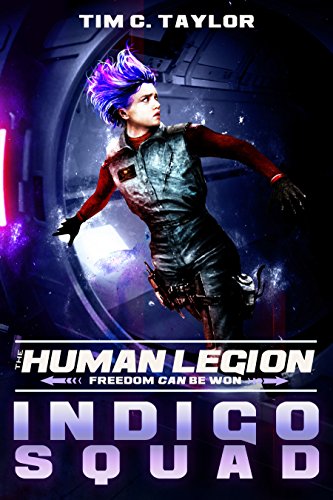 about this book: The characters we met in 'Marine Cadet' are Marines now, having taken their dreams with them on the transport ships to fight in a frontier war. What they meet is not at all what they expected. Betrayal, mystery, and intrigue feature heavily in the second book of the series.

I wanted a slightly different feel to each book in the series, and here we have more attention to life on a starship. If you were running for your life in deep interstellar space, where would you run to? Read and find out.

'Indigo Squad' packs a lot of story into 80,000 words. I had intended 'Indigo Squad' to be the normal length for the Legion novels and 'Marine Cadet' to be a double-length opener. That didn't quite work out, as all the subsequent books so far have been in the 95,000-100,000 range. Book length has been a challenge all along. I could easily fill a dozen novels with the Legion's story, but I wanted a definite end at six books and that's what I'm sticking to. The cutting room floor is knee deep.

Another Thrilling Tale of Intergalactic Adventure

This is another thrilling tale of intergalactic adventure as we follow Marine Arun McEwan into his career as a full fledged Marine. He is out on his first real world mission, when things get exciting. Strange humans that allude to human allies, maybe from the future paired with espionage and treason. Mutinies that make the HMS Bounty look like childs play and dog fights among space ships that leave nothing but carnage in its wake. You meet new characters, while keeping the old ones you loved. What's not to like? BUY THIS BOOK!!! [by SGT MIKE]