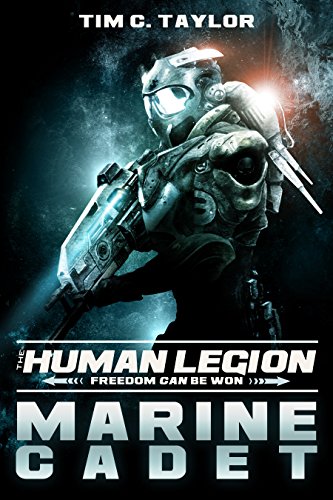 about this book: "Seventeen-year old Arun McEwan is eager to start his new life as a Marine Cadet. Just three more years of drills, combat exercises and brainwashing and he could qualify as a Marine. The alternative is death…."

That's the start of the blurb on the back cover of 'Marine Cadet', the first in the Human Legion series, but what's it really like to spend 140,000 words in the company of Arun McEwan and the other 17-year old cadets?

In many ways it may feel familiar to your school or college years. They study hard, fall out with friends, fall in love, and strive to do well and progress for their own sakes and that of their friends. But that's where the similarity ends, because the reward for graduation is to fight in someone else's war. Failure means death, and given the limited life expectancy in the Human Marine Corps, success ain't so very different.

Arun McEwan is our main character and he's unique: he learns that he hasn't just got a war to fight, but a destiny to fulfil. As it says in the series tagline, "Freedom can be won", and in the first of this six-book series, you meet the friends and sometimes enemies who will try to try to win it for all humanity.

I published 'Marine Cadet' over Christmas 2014. I was out of money and already interviewing for a 'proper job' before the book came out. Eight weeks later, and the Human Legion had sold 30,000 copies. I canceled my job interviews. Fans explained that they felt the characters had become their friends. I feel the same, and hope you will to.

This is a well written military science fiction saga, following the lives of several extremely believable cadets turned Marines. I found it by accident and that crazy Brit Tim C Taylor hooked me from the first chapter. It has it all; love, sex, violence, aliens, space ships and totally bad arsed weaponry. Crafted from a fertile mind, probably a pint too many and an immense writing skill... You can't go wrong! [by SGT Mike]