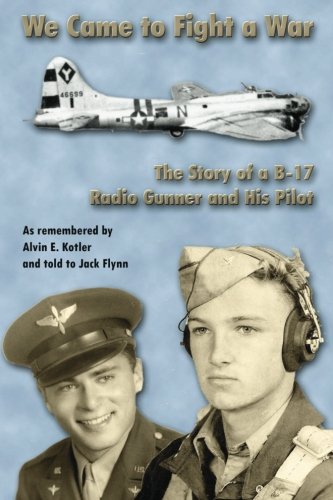 Book: We Came to Fight a War - The Story of a B-17 Radio Gunner and his Pilot by Jack Flynn

about this book: We Came to Fight a War/as remembered by Alvin E. Kotler and told to Jack Flynn.

I first met 84 year old Alvin Kotler at my brother's wake on St. Patrick's day, 2008. He approached the coffin, pinned a pair of silver wings on Bill's lapel, stepped back and saluted.

They completed their training, were shipped overseas to Foggia Italy and flew their first combat mission to Blechammer, Germany on December 2nd, 1944. On April 15th, 1945, they completed their 25th bombing mission and on May 25th, that same year, 1st Lieutenant Bill Flynn was awarded The Distinguished Flying cross for "extraordinary achievement" in combat.

Yes, this is a war story — a war story that takes you viscerally through heart pounding moments of aerial combat and the reactions, feelings and reflections that go with it. But as it unfolds, a larger story emerges — an outrageous story of a grave injustice perpetrated by the U.S. Military on one of their best — a true story involving a terrible and deadly accident, which jump started an egregious wrong to be inflicted upon a young patriot who didn't have the means or the connections to fight back. In the end, this war story evolves to issues beyond forbearance and courage in battle to larger issues of loyalty, integrity, justice, injustice, and a friend and brother's attempt to right a grievous wrong.