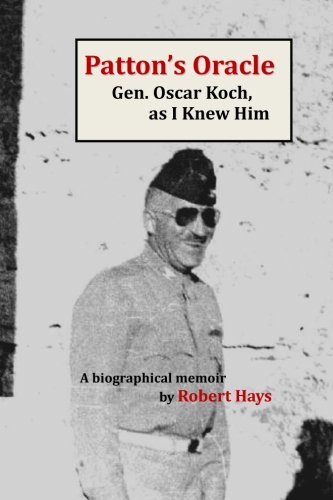 Book: Patton's Oracle - Gen. Oscar Koch, as I Knew Him by Robert Hays

about this book: Gen. Oscar Koch was the chief intelligence officer, G-2, for Gen. George S. Patton Jr. and is truly one of the unsung heroes of World War II. It was my privilege to become good friends with Gen. Koch in his final years, and collaborate with him on a book, "G-2: Intelligence for Patton," which has become a standard reference work for military historians. Published in 1971, it is still in print. But far beyond our collaborative work, it was our deep friendship that had a lasting effect on my life. For a man who was supremely talented on the field of combat, he was remarkably gentle and kind, studious, the type of man every child deserves as a grandfather.

He found no glory in war, nor did he seek glory for himself. Yet he deserves the acclaim now afforded him among military historians and professionals in the field of intelligence. Gen. Koch was my personal hero; it was my intention to sing his song and let him be known to the world. The story is an emotional one, too, given that the general was diagnosed with terminal cancer early in our association and my final tribute was the eulogy delivered at his memorial service and included as an appendix in the book.

Perhaps this is the basis for one reviewer's statement, "When I finish a book with tears in my eyes, as I just did with a work by Robert Hays, Patton's Oracle: Gen. Oscar Koch, as I knew Him . . . I know I've experienced great writing."